Egypt relies heavily on Djibouti as a partner in achieving economic development and security in the Red Sea, the Bab el-Mandeb Strait, and the Horn of Africa region, especially as both countries face the same challenges and have the same aspirations in this regard, Egypt’s Foreign Minister Sameh Shoukry said.

Shoukry’s remarks came in a speech at the meeting of the Executive Council of African Union (AU) Foreign Ministers, on Thursday, in the Mauritanian capital Nouakchott held to prepare for the 31st session of the African Summit at the level of heads of states, scheduled on July 1 and 2.

Shoukry stressed Egypt’s aspiration to Djibouti’s contribution to developing a mechanism for security and economic cooperation in the Red Sea, Foreign Ministry Spokesperson Ahmed Abu Zeid said in a statement.

Egypt also hopes to develop relations with Djibouti in the field of ports, and studies the possibility of establishing an Egyptian free-logistics zone in Djibouti, he added.

On the sidelines of the conference, Shoukry discussed with his Djiboutian counterpart the positive developments in the Horn of Africa, the water file, developments in the Ethiopian Renaissance Dam negotiations, and the situations in Somalia and Yemen.

Shoukry also met with his Malian counterpart Emmanuel Fabiano, praising Malawi’s desire to hold a meeting for the Egypt-Malawi Joint Committee as soon as possible to discuss cooperation between the two countries in all fields.

In 2011, Ethiopia began constructing GERD over the Blue Nile, one of the major sources of the water that forms the River Nile downstream.

Ethiopians see GERD as a defining national project and a means of overcoming poverty. Egypt, however, fears the dam will affect its water-share of 55 billion sq meters, which it has had access to since the historic 1959 agreement with Sudan. 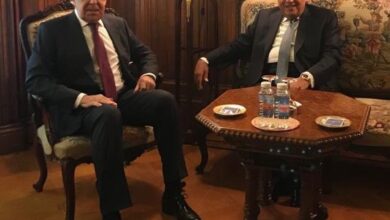 Egypt thanks Russia for its support over GERD dispute