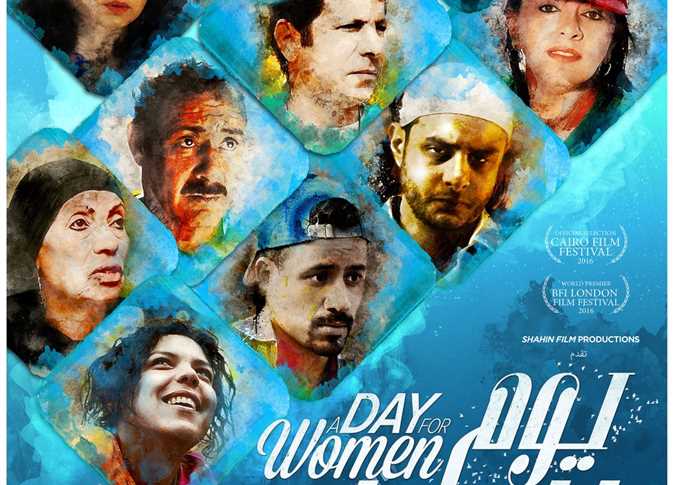 The 38th Cairo International Film Festival gives the opportunity for Egyptian cinema to be presented to a wider, art cinema audience and to international film-makers; they await the annual festival to watch the latest productions of film before they're commercially displayed.
Several Egyptian filmmakers are aspiring to win one of the prizes this year, especially that many Egyptian films have a history of winning the festival awards in previous years.
Film critic Youssef Cherif Rizkallah, Director of the festival, said the permanent complaint from Egyptian film festivals is the absence of recent Egyptian films suitable for entry, but the Cairo International Film Festival this year has five Egyptian films that will be projected for the first time.
Among them are two entries in the official tournament, which are "Youm lel Setat" (a day for women), from director Kamela Abu Zekry, starring Elham Shahine, Mahmoud Hemeda and Nelly Karim; and the second film is "Al-Barr Al-Tani" (the other bank), from director Ali Edris, starring Muhammad Ali and Afaf Shuaib.
Rizkallah added that in the "Prospects of cinema" section of the festival, the film "Lahazat Entiharya" (suicidal moments) from the director Iman al-Najar will be screened, while the Panorama section will be two films; one from the director Waheed Sobhi "Ehna Masreen Armn" (We are Egyptians Armenians) a documentary about the history of the Armenian community in Egypt, and their contribution to Egypt’s economy and culture, after the arrival of thousands of them in Egypt to escape the Ottoman massacres, and the second is "Hamesh Fe Tareekh al-Balee" (A Footnote in Ballet History) directed by Hisham Abdel Khalek, which follows the story of the first generation of world-class Egyptian ballet dancers, specifically the first five girls to dance in the famous Russian Bolshoi Theater.
Rizkallah said that the role of the festival is not limited to the introduction of new movies, but extends to support the experiments of excellence in contemporary Egyptian cinema, so it has introduced the "Panorama section" of the new Egyptian cinema, exhibiting eight films of the most important productions of 2015 and 2016, which met with critical and commercial success and participated in the larger festivals of the world and will be screened with English subtitles.
Egyptian films in the 38th edition of the festival will showcase a diversity of issues in the participating works. The story of "Youm lel Setat" takes place over twenty-four hours in a poor neighborhood in Egypt, where a youth sports center decided to devote a special day for women in the swimming pool. Events reveal the consequences of this decision on the social, psychological and emotional life of the women in the district.
"Al-Barr Al-Tani" (the other bank), from director Ali Edris follows the stories of a group of young Egyptians, who escape Egypt's underprivileged rural villages, all sharing one desire; to immigrate to Italy, but without having any official documents aboard a ramshackle old ship. Seeing Italy's coastline ignites their hopes for a better life, but then the treacherous sea waves put an end to all of their dreams.
"Eshtebak" (Clash) from director Mohamed Diab stars Nelly Karim, Hani Adel, Tarek Abdel Aziz, Ahmed Malek, and Khaled Kamal. Most of the film's events take place in a locked police wagon, crammed with protestors representing different sectors of Egyptian society. Their authentic interactions are filled with madness, violence, romance, and comedy.
"Al-Maa Wal Khodra Wal Wagah al-Hasan" (Brooks, Meadows and Lovely Faces) from director Yousry Nasrallah stars Laila Eloui, Mena Shalaby, Bassem Samra, Ahmed Daoud, Sabrine and Ena’am Salousa.
"Kabl Zahmet el-Saif" (Before the Summer Crowds) from director Mohamed Khan, stars Maged El-Kedwany, Hana Shiha, Ahmed Dawood, Lana Mushtaq, and Hany El-Metennawy.