Electricity distribution companies in Egypt will start applying the new prices for electricity to homes on Thursday, according to the plan announced last year to gradually eliminate energy subsidies until 2025.

The new increase is on an average of 13 percent in various segments. Prices for commercial and industrial facilities will witness no increase.

The general average of selling prices for different voltages is 106.9 piasters per kilowatt, the average price of a kilowatt for low voltage is 99.8 piasters, and for medium voltage is 123.9 piasters.

A source in the ministry said that these companies will apply the increase automatically, and will not need to issue new decisions.

Prepaid meters are also programmed to calculate the increases.

Those whose consumption exceeds 650 kilowatts will be charged from the beginning of consumption up to less than 1000 kilowatts at 128 piasters per kilowatt.

Those whose consumption exceeds 1,000 kilowatts will be charged at 145 piasters per kilowatt at the same current tariff rate.

For retail consumption segments, prices remained the same as the previous year for closed units. 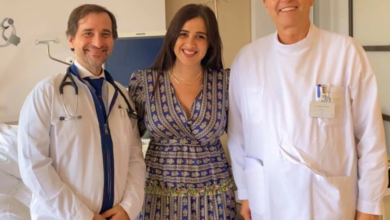 Yasmin Abdel Aziz thanks Swiss doctors who treated her