Electricity Minister Mohamed Shaker al-Markabi said fuel shortages reduce the electrical power capacity, but assured that the capacity would increase from 31,000 to 49,000 megawatts in five years.

During a seminar at the Engineers Syndicate on Sunday the minister explained that local investments are not enough to achieve the target. “We need foreign capital as well,” he said.
He added that the deficit in electric power reached 3,000 megawatts. “We use 23,000 tons of fuel per day,” he said. “But we have a plan to raise the efficiency of operation despite limited fuel amounts.”
“We are signing contracts with 38 investors to build fixed and mobile units to increase production,” Markabi said.
He explained that 90 percent of the production relies on diesel fuel and gasoline and the rest on hydraulic power stations generating electricity from the wind.
He said the existing power plants exceed their working capacity and need maintenance. “Other challenges are unprecedented increases in consumption, high global market prices of fuel, irregular supply of fuel and environment preservation conditions,” he said.
“We are facing repeated interruptions by using conventional and renewable energy sources, in addition to optimal utilization of human, financial and technological resources,” he said.
He said linking the national grid with the Saudi network to exchange energy will produce 3,000 megawatts of extra electricity. “This project costs US$1.6 billion and is expected to be completed by 2018,” he added.
Markabi explained that there are several alternatives for generating electricity, including steam stations, gas stations, nuclear plants, wind power generation plants and solar plants.
“Prices will increase in the coming five years by which time subsidies would be reduced to LE9 billion only for the social classes that need it,” he said.
“We are replacing the old meters with smart ones for 30 million subscribers,” he said, expecting them to rise to 41 million in 2022.
Edited translation from Al-Masry Al-Youm
Tags
electricity

In the dark: Nigeria’s Maiduguri struggles to recover without power 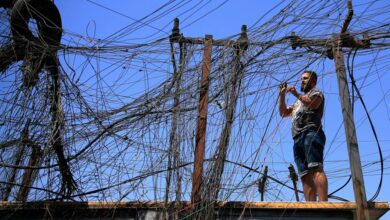