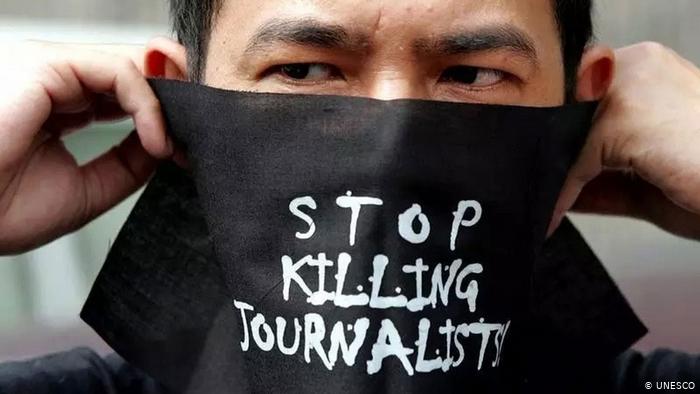 For the first time in three years, North Korea evaded the wooden spoon: The country is no longer ranked last in Reporters Without Borders’ annual World Press Freedom Index published Thursday. Instead, it is Turkmenistan that has captured the bottom spot in 2019.

Once again, Norway tops the global ranking, followed by Finland and Sweden.

The Netherlands dropped out of the top three, and in the opinion of Sylvie Ahrens-Urbanek from the German branch of Reporters Without Borders, this demotion is proof that there are press shortcomings even among countries often touted as exemplary democracies.

“There have been instances of journalists needing police protection for reporting on organized crime,” said Ahrens-Urbanek, who stressed the importance of reversing this negative trend in countries that have typically had strong press freedom.

“Essentially, the climate that journalists work in has simply deteriorated worldwide,” said Ahrens-Urbanek, explaining that the profession is now experiencing a “climate of fear.”

What Ahrens-Urbanek finds particularly striking is the increasing amount of hateful rhetoric directed towards journalists in Europe and the United States, although the rise is a phenomenon being seen worldwide. 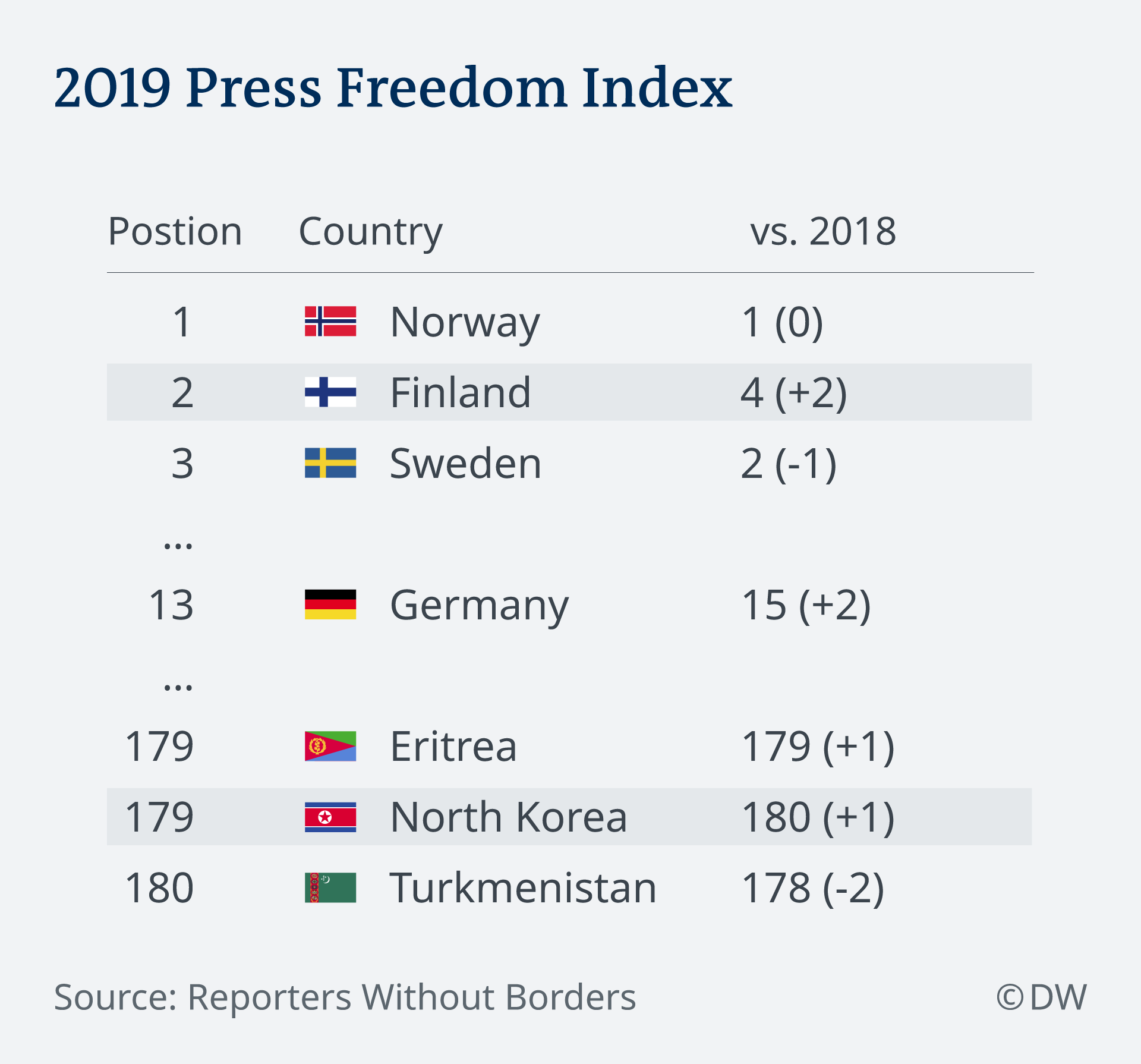 And time and time again, it does not stop at words: Even in Germany, Reporters Without Borders recorded 22 physical assaults against journalists last year.

“We still remember the demonstrations in Chemnitz, for example, where journalists were not just verbally attacked on a massive scale, but also physically, like by having their cameras knocked out of their hands, for example,” said Ahrens-Urbanek.

Germany: Climbed due to others’ decline

The fact that Germany climbed two spots to 13th place, despite increasing hostility towards journalists, is mainly due to declining conditions in other countries.

Austria, for example, dropped five spots to 16th place. Last year, the right-wing populist Freedom Party of Austria (FPÖ), which constantly antagonizes the press, entered the country’s coalition government. In September, Austria’s Ministry of the Interior, led by the FPÖ’s Herbert Kickl, issued a directive that communication with certain media critical of the government should be kept to a minimum.

In Hungary, which fell 14 spots to 87 on the list, the situation is similar; Bulgaria was the only European Union country to rank lower, remaining at its spot of 111.

Journalists in Europe murdered and imprisoned

This downward trend among EU states is particularly noticeable for Malta, which fell 12 places to 77, and Slovakia, which dropped eight spots to 35.

Maltese investigative journalist Daphne Caruana Galizia was murdered in October 2017 and the investigation into her killing is making little progress. In Slovakia investigative journalist Jan Kuciak and his fiancee, Martina Kusnirova, were killed in February 2018. One person has confessed to the murders and Slovakian authorities are holding three other suspects in custody, including an influential businessman whose dubious practices Kuciak investigated. However, Ahrens-Urbanek said Reporters Without Borders was still “unsatisifed with the way the proceedings are being conducted.”

Read more: 2 journalists were murdered — but their investigations live on

The brutal killing of Jamal Khashoggi inside the Saudi consulate in Istanbul was perhaps the most high-profile murder of a reporter last year. In the latest rankings, Saudi Arabia fell three places to 172.

While the Turkish government has been very public about its intent to shed light on Khashoggi’s murder, the country has been no friend to the press. “Turkey is the country where the most journalists are still in prison for their work,” said Ahrens-Urbanek. In this year’s ranking Turkey remains at 157.

The Central African Republic saw the biggest decline in the press freedom index — a drop of 33 places. “Since the end of the civil war, the country has been a largely legal vacuum,” said Ahrens-Urbanek, adding that the murder of three Russian journalists there last year had a “negative impact” on its ranking, which is now listed at 145. 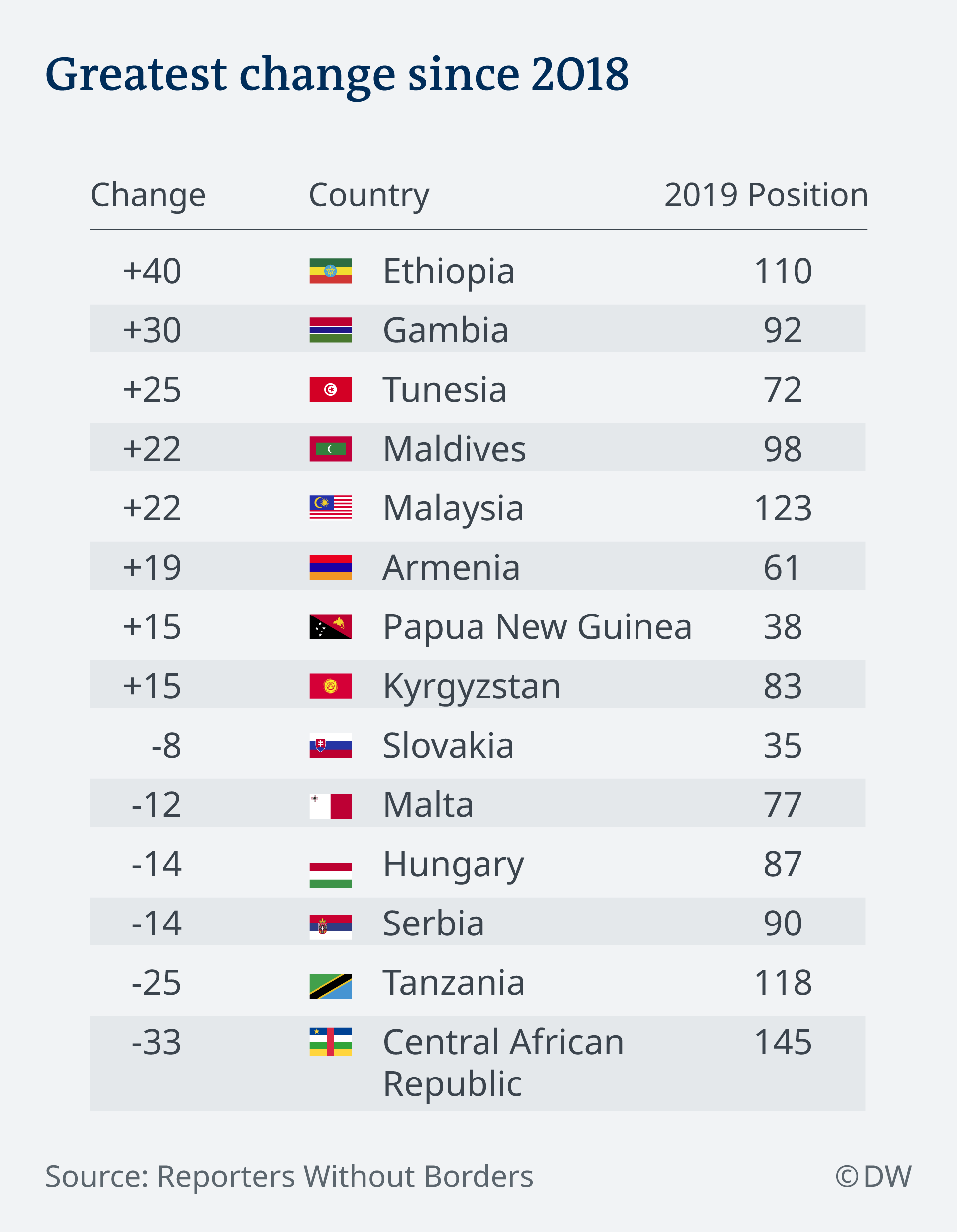 Huge improvements in a short time

But it is not all bad news: Some countries have made progress when it comes to fostering press freedom. Ethiopia had the largest increase, jumping 40 places to 110. Prime Minister Abiy Ahmed, who has only been in power for a year, but has enacted a series of reforms, including releasing imprisoned journalists and unblocking previously-restricted websites.

Gambia rose 30 places to 92, one year after the African state saw a transition of power. This year’s ranking builds on progress documented last year, when Gambia climbed 21 spots. Reporters Without Borders said that under Prime Minister Adama Barrow, Gambia has seen a plurality emerge in the media industry.

“If the political will is there, conditions can improve quite quickly,” said Ahrens-Urbanek. “We have seen the same with Asian climbers such as Malaysia and the Maldives where the backstory is very similar.”

However, Ahrens-Urbanek cautioned that a change of power does not automatically lead to improvements. “Tanzania is a negative example, where the president has progressively reduced the scope for journalists,” she said. The East African country fell 25 places to 118 in the latest index.