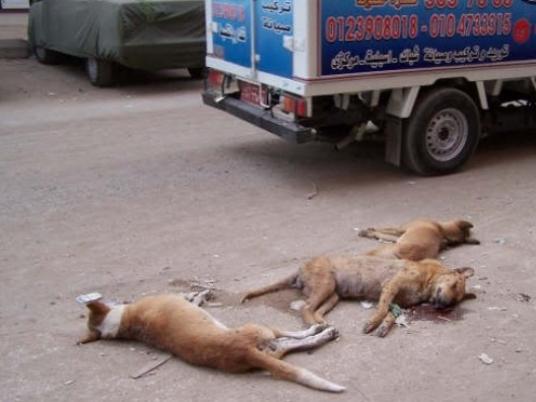 After stray dogs violently attacked two children in Moqattam last month, their families pressured the local veterinary council to put an end to the problem by poisoning the animals with strychnine — a deadly pesticide.

As a lethal product, strychnine should not be deposited at random, as it can also threaten residents’ health. In addition, prominent welfare activists like Dina Zulfikar criticized the council for not analyzing the area to determine exactly which animals were roaming Moqattam’s streets, since wild protected species like foxes could perish as well.

The General Organization for Veterinary Services (GOVS), the body responsible for addressing the stray dog problem, is known for systematically poisoning and shooting street animals to deal with the issue. Within two weeks of the mass killing campaign, 156 strays from the area had died.

Hassan Shafiq, one of the media coordinators at the veterinary organization, a body that falls under Agriculture Ministry, says the GOVS is simply doing its job.

The mission of the GOVS’s trained veterinarians is to curb the growing number of stray animals roaming the streets of Cairo and other big cities.

“We believe our priority is protecting human beings,” he tells Egypt Independent.

“We do not have any statistics on the numbers of strays,” he adds. “We brought specialists to start a count in greater Cairo and the final results were 35,000 dogs. However, these numbers cannot be verified.”

Shafiq says the organization sometimes works in collaboration with police to shoot dogs.

But animal rights activists voice frustration about the cruelty and inefficiency of these techniques to control the stray animal population.

“These veterinarians shamelessly go against the whole essence of their work,” Zulfikar says.

For Mona Khalil, chairperson of the Egyptian Society for Mercy to Animals, strays actually provide a service for the residents of major cities.

“They are very useful in diminishing the ferret and rat population, and their ongoing extermination has already created an imbalance in the environment,” she says.

For animal activists, instead of trying to exterminate street animals, the GOVS should focus on keeping the population in check by launching spaying and neutering programs.

She says using expensive poisons like strychnine and sending teams of vets to get rid of stray animals is nothing more than a waste of public funding.

“If poisoning and shooting strays was a successful approach to the problem, then the issue would be sorted by now,” says Khalil.

But Shafiq says the GOVS does not have the money for alternative methods.

“We are looking into neutering and spaying, but we are not equipped to do so and we don’t have the funds for it,” Shafiq says.

And few Egyptians feel the same way about protecting the nation’s stray animals. In fact, some residents take matters into their own hands and kill strays themselves, using similar methods as the GOVS, or worse.

Ahmed al-Kabani is a veterinarian who works in a private clinic in Qattamiya that also treats stray dogs.

“People tend to call authorities to demand the killing of dogs in their area,” he says.

If they don’t get an answer, they resort to their own methods.

“We have had some cases of dogs being fed balls of meat filled with ground-up pieces of glass, which is extremely painful and fatal to animals,” he says.

To change people’s minds, activists say they want to work with government officials to create a nationwide awareness campaign calling on veterinarians to begin a neutering program for strays.

“Funding is not the issue. Money just needs to be shifted from expensive strychnine poisons to paying professional veterinarians,” says Zulfikar.

However, veterinary schools must also begin teaching students about compassion and how to think about the welfare of animals, Khalil says.

“Getting a degree here is just about memorizing for tests, and practical lab experiments [that] inflict tremendous pain on animals,” says Khalil.

She adds that such mistreatment often rids future veterinarians of their compassion for animals.

“This puts shame on the medical profession and ultimately creates robots with no mercy,” Khalil says.

Zulfikar adds that Dar al-Ifta issued a fatwa in 2008 stating that police and others should not kill stray dogs because it violates Sharia.

“It is the role of educators and civil society to instill compassion in future generations, as well as guidelines on how to understand and to treat animals properly,” she asserts.