An Egyptian-Russian archaeological mission operating in the Deir al-Banat area in Qalmasha village of Fayoum Governorate discovered on Tuesday a wooden coffin with a mummy dating back to the Greco-Roman era.

The mummy, which was in a good condition, was wrapped in linen and was wearing a blue and gold cartonnage mask, said Secretary General of the Supreme Council of Antiquities, Mostafa al-Waziry.

He noted that although the mummy was well-preserved, the coffin was in a poor state as the lid was broken and the base had numerous cracks with no inscriptions on it.

In a press statement, Waziry said that the mask is adorned with an image of the sky deity Khebir. The chest depicts the goddess Isis, while beneath the feet there is a drawing of a white clog.

The mission carried out the initial restoration of the coffin and the mummy at the site of the discovery, said head of the Islamic Antiquities Sector, Mohamed Abdellatif.

The Russian mission, which is affiliated with the Russian Institute for Oriental Studies, has been working in the area for approximately seven years.

The archaeological area consists of two parts. The first section houses the ruins of a church and a monastery, while the second consists of a cemetery dating back to various periods, including the Greco-Roman era and the early Coptic period. 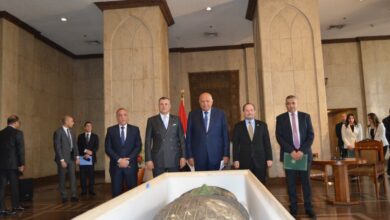 Egypt retrieves a 2,300-year-old sarcophagus from the United States