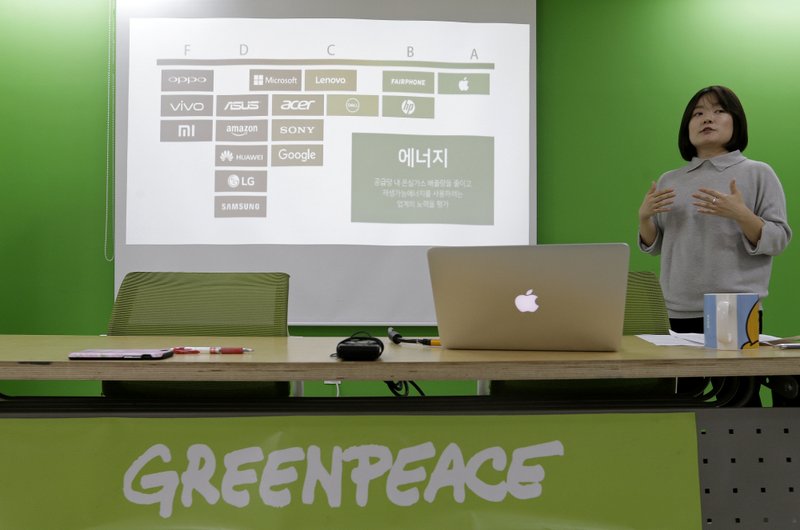 Many of the biggest technology companies failed to deliver on commitments to reduce emissions of greenhouse gases and are still reluctant to commit fully to renewable energy, according to Greenpeace USA’s Guide to Greener Electronics. The report, which assessed 17 top global tech companies in three areas, also faulted many of them for failing to use more recycled materials in their products and slow progress in phasing out use of toxic materials.

“Tech companies claim to be at the forefront of innovation, but their supply chains are stuck in the Industrial Age,” Gary Cook, a campaigner at Greenpeace USA, said in a statement.

The report details the hidden cost behind what may be the most sought-after and celebrated consumer products in the 21st century: mobile computing devices like smartphones and tablet computers.

Since 2011, Greenpeace has urged global tech companies to transition to renewable energy, prompting some of them to switch to environmentally friendly power sources for their data centers. The group is setting broad sight: tackling energy issues in manufacturing and supply chains, designing longer-lasting products to reduce electronics waste, and urging the entire industry to rethink its “take-make-waste” business model altogether.

The report highlighted that tech companies’ manufacturing processes are not as environmentally friendly as their innovative images might suggest.

While the energy consumption in the tech industry rose rapidly to fuel the supply chains and the manufacturing of these products as well as the data centers where social media, cloud computing and other applications run, so have the greenhouse gas emissions.

Samsung Electronics received a grade of D in its use of renewable energy, which accounted for just 1 percent of its manufacturing process, compared with Apple, which relied on renewable energy for 96 percent of its operation. Samsung, the world’s largest maker of smartphones and key component suppliers of many of the tech companies featured in the report, saw its greenhouse gas emissions rise 24 percent in 2016 from two years ago. It also received low marks on its efforts to reduce and disclose hazardous chemicals at workplaces and to design long-lasting products.

Samsung Electronics did not immediately respond to an email seeking comment.

Chinese smartphone makers Huawei, Xiaomi, Oppo and Vivo, which have gained a significant market share in the last few years, have scored below average in all categories and lacked transparency and commitment in renewable energy, the report said.

Amazon was the only U.S. company that received the lowest mark, an F, in its overall environmental performance, along with the Chinese phone makers. Greenpeace said Amazon was among the least transparent companies and did not report the greenhouse gas footprint of its own operations.

Among the 17 companies, Amsterdam-based Fairphone and Apple were assessed to be performing better in various areas.

Greenpeace urged the companies to use more renewable energy, especially switching the energy sources that power their supply chains. It also urged the tech companies to remove hazardous chemicals and other materials from their products and workplaces and design longer-lasting devices to help reduce waste.

If the tech industry does not change to renewable energy, the world won’t be able to tackle climate change, said Greenpeace campaigner Lee Insung.

“In the next three to five years, the use of renewable energy and how well the companies cope with climate change will determine their core competitiveness,” Lee said.

'Graviky Labs', inking carbon out of the air