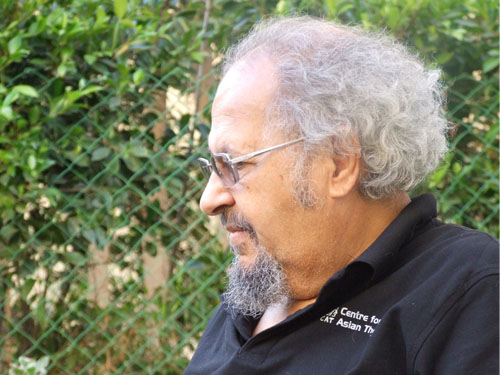 I will not be able to do justice to the life of Hanaa Abdelfattah by writing here, for I only met him just over a year ago. I had the great privilege of accompanying him in some of his final days on this earth. At the hospital. In his home.

In “The work of mourning,” Jacques Derrida describes two important acts in the course of mourning the dead: reading and speaking. The philosopher intends, of course, “reading” in the broad sense of reading a person’s work.

While Abdelfattah was a theater director, an actor, an author, and a translator, I will here only re-read a small part of his corpus: the only play of his that I had the honor of personally witnessing, and two theater pieces directed by Abdelfattah early in his career which he spoke with me about a number of times.

Overcome with sadness, may these simple words be my way of speaking of him, to him, and mourning him. May they thus be a celebration of the life of Hanaa Abdelfattah who left us one month ago today.

Last June, Abdelfattah invited me to attend the performance of the graduating class at the art academy he was directing. Along with the two friends I went with, I was shocked by the wretched condition of the academy’s campus. The decrepit buildings both disclosed a certain corruption within its walls and reflected the minimal value given to the arts in Egypt.

The play began late. I sat with my two friends on the steps outside the theater, surrounded by garbage and dogs. I started having doubts about whether Abdelfattah, whom I respected greatly, would be able to create something beautiful within this ugly space.

He outdid my expectations.

His graduating students performed a play divided into two parts; it was based on two Fyodor Dostoyevsky novels, “The Brothers Karamazov” and “Crime and Punishment.” Amid (and despite) this poor and depressing atmosphere, Abdelfattah directed an incredible performance: lavishly rich, full of emotion, filled with drama, made up of raw human tragedy. And within this performance a question was forcefully posed — one unspoken in Egypt — does God exist?

The conditions this play was produced in reveal a lot about the conditions that this great director had to deal with throughout his whole career in Egypt.

Abdelfattah was not a public political figure. He was, rather, political in a much deeper sense. He was political in the way he lived his life, the way he engaged the people he encountered on the street, through the decisions he took, and in the way he directed his plays. Jean-Luc Godard said of his filmmaking: “The problem is not to make political films, but to make films politically.” In many of his works, Abdelfattah similarly directed theater politically. He had no need to make public statements about the revolution, he embodied a revolution in the way he taught, the way he thought, the way he acted in a society often obsessed with tradition that suppresses one’s sense of humanity. He visited Tahrir Square on various occasions, always only briefly. But the revolution was not about the square simply; the ongoing revolution exists wherever people are revolting and encroaching on the monopoly of illegitimate authority and its tentacles of theft and exploitation. Abdelfattah had been a practitioner of this style of revolution long before 25 January.

In the late 60s when much of the world existed in a state of revolt, Abdelfattah also rebelled, but quietly, in his own way.

Following his studies at the Academy of Arts, Abdelfattah embedded himself in the life of the villagers of Dinshaway in Monufiya governorate. Only this way could he find his actors. He gave one of the main roles in the play “The King of Cotton” to a shoemaker, another role to a woman that sold bread in the village streets. Most of his actors were amateurs, the inhabitants of the village. In the performance, the division between performers and audience was a thin line and the distinction between performance and “reality” not always certain. Already, early in his life, Abdelfattah had the ambition to push the boundaries of what was and what wasn’t acceptable in the Egyptian world of theater; he shared few priorities with the theater industry in Egypt and thus quickly became an outcast in the clearest sense.

Appointed head of the Hurghada Culture Palace, he decided to work with the taraheel workers (daily wage earners working in construction) there. The workers who helped turn Hurghada into what we know it to be today were not considered potential actors, nor were they a prime target audience for anyone in Egypt at the time. Quietly and out of sight, he worked with those that no one had any interest in, except to exploit their labor; for Abdelfattah saw in them the potential for great works of art and a wellspring of creativity.

This act posed a threat to the state that brought about his exile. After the governor of Hurghada requested Abdelfattah's removal from the Culture Palace, the Culture Ministry responded by granting him a study grant to Poland. Abdelfattah’s banishment resulted from a quiet attempt to break the boundaries of the norms of theater in Egypt. How dare he work with these outcasts? Yet, wasn’t our revolution a revolution of outcasts? Certainly, the middle class flashed their faces before the TV screens, but it was the likes of these villagers and taraheel workers that Abdelfattah worked with who led the protests seeking to overthrow a system that gave them no part. Abdelfattah gave them a part, the main role — this is what I learned from him.

By reading his work and speaking these words in an attempt to learn from and live them, the impossible is possible.

And his beautiful soul lives on.