Minister of Immigration and Egyptians’ Affairs Abroad Nabila Makram witnessed the opening of the first Ramadan tent under the initiative “Iftarna Ma’a Ahalina” (Our Iftar with our People), launched by Egypt’s Ministry of Immigration in cooperation with non-profit charitable foundation Misr al-Kheir.

The initiative aims to connect Egyptians abroad with their country through providing Iftar meals for the underprivileged on large scale across Egypt’s governorates.

The expenses of the first Ramadan tent were donated by Nasser Fouad, deputy lord lieutenant of Cheshire, as well as some Egyptian doctors who live in Britain. Fouad is the first Egyptian to achieve the status of Lord in the UK after being known for his philanthropic activities in Egypt, Africa and the UK.

In a statement released on Saturday, Makram said that the tent was created through the donations of Egyptian doctors in Britain and will be named after them. The minister also expressed her happiness to witness the opening of the first tent under the initiative saying, “days ago, we were talking about Egyptian communities abroad and the return to the roots for foreign communities that used to live in Egypt. Today we are talking about Egyptian roots abroad all over the world, returning to serve their country.”

She added that people rushed to help as soon as the initiative to provide Iftar for the poor was announced, adding that she still gets requests from people who want to take part.

Though this is the first time Egyptian expats donated for Iftar of Egyptians in a government-organized event. The government has launched several initiatives previously in an effort to encourage Egyptians expats to take part in charitable activities, most notably the Tahya Masr Fund.

There are also several private charitable organizations that are keen to feed the poor during Ramadan such as the Egyptian Food Bank. 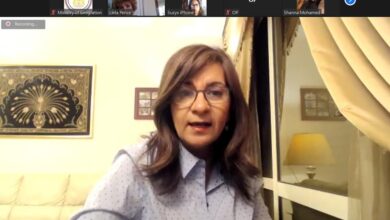