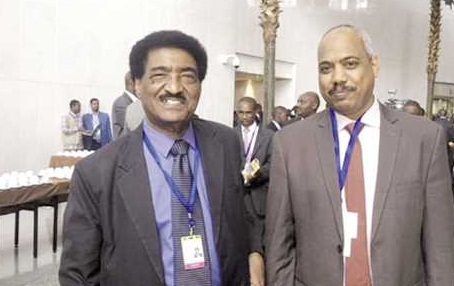 In an interview with Al-Mary Al-Youm (AMAY) on the sidelines of the African Union (AU) summit, Halim described the meeting between the leaders as “the basis for a new page that we hope will be based on transparency as agreed, and based on mutual respect and common interests, because what connects the two countries is greater than my words.” Halim revealed that the date for his resumption of duties and return to Cairo will be determined in meetings upon his return to Khartoum.

■ (AMAY) How do you see the results of the summit between Sisi and Bashir in Addis Ababa?

– Halim: “I can say that it was a very important and positive meeting, and the two leaders had a closed, heart-to-heart conversation, which touched on all the concerns and challenges, and of course the meeting came after a period in which the relations between the two countries were clearly tense – after the recall of the Sudanese ambassador from Cairo – and this is like a strong protest message to Egypt about the concerns and problems that Sudan feels.

“The meeting between the two presidents has established a new page that we hope will be based on transparency as agreed, and based on mutual respect and common interests, because what connects Egypt to Sudan and Sudan to Egypt is greater than my words. I can say that their meeting recently managed to put relations in the right course and resolve outstanding issues and devote each country to its great concerns, internally, regionally and internationally.

“The two presidents called a committee of the foreign ministers of both countries and heads of the intelligence services to sit down for a meeting as soon as possible and draw up a road map to address these concerns and problems to cooperate not only in the political and diplomatic fields but in all sectors between the two countries.

“God willing, this meeting will be held soon, and will devise a very clear roadmap to address the concerns of the media, politics, security and borders as well.”

■ AMAY: Some blame the media, whether in Egypt or Sudan, for the misunderstanding in the relations between the two countries, what do you think?

– Halim: “Egyptian media played a role that may be essential in the recent hit to the political relations.

“First of all, from my remarks and I am an ambassador to Sudan in Cairo, the Egyptian media has continuously insulted president Bashir personally, although he is the closest person to Egypt and fought on the frontline in the War of Attrition and October War to defend Egypt and its existence, and the existence of the Arab world itself. Sisi honored him in memory of the October victory. I personally attended meetings and a file in which every word, and every talk-show spoke about Sudan and insulted president Bashir.”

■ AMAY: But some also accuse the Sudanese media of playing a role in trying to destroy the relations.

– Halim: “I can say that the Sudanese media’s role was only a reaction to what was raised in Egyptian media. The Sudanese media by nature is conservative and adheres to the [norms] of the relationship between the two countries.”

■ AMAY: Was there agreement on a date for the meeting of the quartet committee between the foreign ministers and the heads of the intelligence services?

“Perhaps before we leave Addis Ababa after the summit, maybe the foreign ministers will agree on the appropriate time for the meeting. I do not think this will take a long time, as we need to do this as soon as possible so that we can contain what happened and build on the presidents’ positive meeting and develop relations in a new course.

“As I mentioned earlier, [the new course must be] based on mutual respect, the most important thing in international relations is mutual respect. If there is no mutual respect, there will be no ups in these relations, which should be based on transparency and common interests. We have a lot of interests that can be achieved together in Sudan and Egypt. The Nile Valley sector in the Arab region is the most vital and the most developed region in the Arab world, and there are great opportunities for cooperation and integration.”

■ AMAY: Is the date set for your return to Egypt to resume your work?

– Halim: “Once we return to Khartoum after the end of the AU Summit, we will be engaged in meetings to determine the date of return.”

■ AMAY: Does this means that the date of return is not set?

– Halim: “The date of return is not yet determined, but based on what has been achieved in these meetings and indicators, we will make the appropriate decision in time, God willing.”

■ AMAY: One of the issues that have caused concern in Egyptian public opinion is the Turkish presence on the Sudanese Suakin Island on the Red Sea. Some regarded this as hostile against Cairo considering the strained relations between Egypt and Turkey following the June 30 revolution. What do you think?

– Halim: “The media approach to the visit of the Turkish President Tayyip Erdogan to Khartoum was one of the reasons for the tension in relations recently.

“Firstly, no country has the right to question another country regarding the leaders who visit it. As an ambassador in Cairo, I see dozens of international and regional personalities visiting Egypt every day, and I always wish that these visits be in the interests of the Egyptian people and its development.

■ AMAY: Is the date set for the tripartite summit, which brings together the leaders of Egypt, Sudan, and Ethiopia?

– Halim: “The summit will be held before the conclusion of the AU summit and the return of the heads of state to their countries, mostly happening today [Monday]. But if the African summit meetings proceed in an accelerated manner, the tripartite summit may be held before that, and the three parties are currently engaged in the arrangements for this summit, which comes not only after tension between Egypt and Sudan, but also after tension over the Grand Ethiopian Renaissance Dam (GERD). We hope that these meetings will reach understandings and develop a road-map to proceed in this matter and realize the principle that the River Nile should be a platform for cooperation not conflict.”

■  AMAY: Has Sudan determined its position on the Egyptian proposal with the participation of the World Bank in the technical negotiations over the filling of GERD as a neutral party?

Halim: “We are still considering this proposal, perhaps during the summit or later during the meetings of the technical committees, we determine our position, but so far there is no clear response. The technical bodies in Sudan are still studying the Egyptian proposal – which we received in a written letter from [Egyptian Foreign Minister] Shoukry to his Sudanese counterpart, Ibrahim Ghandour.”

■ AMAY: There were concerns in Egyptian public opinion that the misunderstandings in the Egyptian-Sudanese relations may affect Khartoum’s position in the negotiations of GERD. Does everyone understand the importance of this issue for the Egyptian people?

– Halim: “We recognize the importance of this issue for the three parties, not only for Egypt. But at a time when relations were good and described as distinctive – before the current atmosphere of tension – the Egyptian media was talking about Sudan taking sides with Ethiopia.

“It is noted that coverage of the Cairo media regarding GERD negotiations has confused the Egyptian negotiator before confounding the other parties in the negotiations: because it is not based on sound basis.

“There are technical issues, but they are being politicized – I do not know why – in some media outlets. I think the tripartite summit to be held in Addis Ababa will send a message to the negotiators from the three countries to return. This will be one of the outcomes of these negotiations, to return to the technical negotiating room on the initial advisory office’s report [on GERD] and other issues.”

■ AMAY: But Egypt confirms that it has shown goodwill intentions regarding the negotiations of GERD throughout the negotiations. Sisi signed the Declaration of Principles in Khartoum, but Ethiopia is delaying and continuing construction before the end of technical studies: And this is matter of concern for the Egyptian people.

– Halim: “Here I point to the fact that the Ethiopian prime minister made it clear in Cairo that the river should be a platform for cooperation, not conflict, and there should be no fear of any damage. He stated that in some aspects of the dam there may be benefit for Egypt.

“The Declaration of Principles is committed to by the three states and is good and excellent. [It] can be a reference to [help resolve] any dispute that may arise between the three countries. But patience is a duty to these technical issues, which are complex and touch vital issues.

“Water diplomacy is new in global diplomacy now. It is receiving great attention and is full of technical, engineering, and environmental details. There must be patience and specified time for these studies to see the specific effects of the dam on both Sudan and Egypt.”