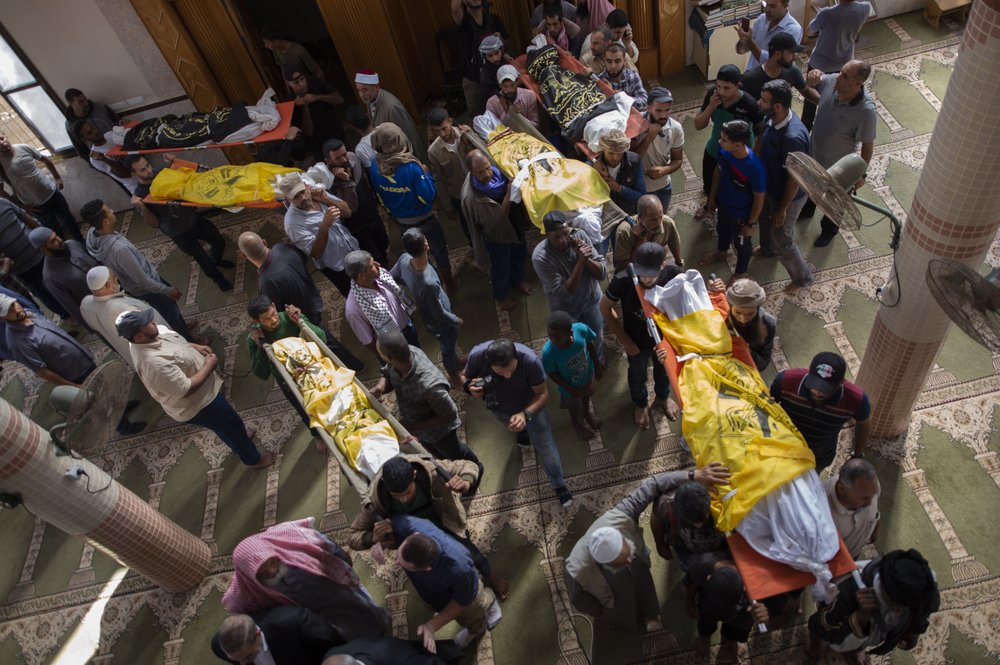 Israel launched fresh strikes against Islamic Jihad targets in Gaza, the army said early on Friday, weakening a ceasefire put in place after fighting this week killed 34 Palestinians in exchanges of fire.

The ceasefire began Thursday morning following two days of deadly violence in the Gaza Strip triggered by an Israeli strike on an Islamic Jihad commander.

It came after five rockets were fired at Israel from Gaza — also after the ceasefire came into effect — with two of them intercepted by air defenses, according to the army.

“The IDF views the violation of the ceasefire and rockets directed at Israel with great severity,” the army said in a news release.

Israel’s military was prepared to “continue operating as necessary against all attempts to harm Israel civilians,” it said.

Two injured citizens were being treated in hospital in the southern part of the territory, according to the health ministry in Gaza.

The ceasefire brokered by Egyptian and UN officials, the usual mediators between Gaza and Israel, was agreed as the flare-up raised fears of a new all-out conflict.

During the day on Thursday normal life had resumed quietly in Israeli regions near the Gaza border, while in Gaza, citizens had also embraced the return of relative calm.

“We hope for peace, we don’t want war,” said Mahmoud Jarda, an inhabitant of the enclave.

The escalation began early Tuesday with Israel’s targeted killing of a top Islamic Jihad commander, Baha Abu al-Ata, whom it accused of being behind rocket fire and other attacks.

The violence came at a politically sensitive time for Israel, with no new government in place since a September election ended in deadlock.

Israeli Prime Minister Benjamin Netanyahu said Abu al-Ata “was killed alongside dozens of terrorists” after the strike on his home, adding: “Our enemies got the message: We can reach anyone, even in their bed.”

Israel’s military said some 450 rockets had been fired at its territory since Tuesday morning and air defenses had intercepted dozens of them in fireballs high in the sky.

No Israelis were killed, though one rocket narrowly missed speeding cars on a busy highway. Israeli medics said they had treated some 63 people as of Wednesday night for mild injuries and stress.

Islamic Jihad has said several more of its members were among those killed in the fighting this week.

Palestinian officials said eight members of the same family, including five children, were killed in an Israeli strike in the central Gaza Strip.

Israel’s military said the man targeted and killed in that strike was an Islamic Jihad rocket unit commander.

“He, like many others, had the tactic of hiding ammunition and military infrastructure in their own residence,” said military spokesman Jonathan Conricus.

“Of course we try always to minimize the amount of non-combatants killed or injured.”

Relatives, neighbors and an Islamic Jihad spokesman disputed that he belonged to the militia, with some saying he had previously worked as a Palestinian Authority (PA) military police officer.

“This is a war crime,” said neighbor Adan Abu Abdallah. “You are killing innocent children, sleeping at home.”

Unusually, Israel has singled out Islamic Jihad rather than hold Hamas — the Islamist movement that rules Gaza — responsible for the violence.

Israeli analysts said it was a clear signal the army sought to avoid a wider conflict in Gaza, where Israel and Palestinian militants have fought three wars since 2008.

Hamas repeatedly said it would not abandon its ally, but its decision not to join the fight helped maintain a fragile truce with Israel that has seen tens of millions of dollars in Qatari aid flow into the impoverished Gaza Strip since last year.

An Egyptian official said the ceasefire had included an agreement that Palestinian groups in Gaza work to prevent violence by demonstrators during weekly protests near the border fence.

In return, Israel agreed to stop hostilities and commit to a ceasefire during the weekly demonstrations, according to the official.

Israel did not confirm any of those claims.

Netanyahu did not comment publicly on the ceasefire, but had warned a day earlier that Islamic Jihad must stop its rocket attacks or “absorb more and more blows.”

He added that Israel did not want a further escalation but, if necessary, was prepared to respond “without mercy.”

Image: Palestinian mourners carry out the bodies of Rasmi Abu Malhous and seven members of his family who were killed in overnight Israeli missile strikes that targeted their house, during their funeral at a mosque in Deir al-Balah, central Gaza Strip, on Thursday (AP Photo/Khalil Hamra)