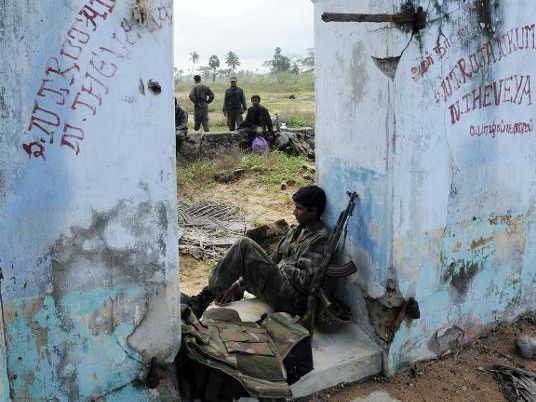 It was a massacre that shocked the world's humanitarian community.

Seventeen aid workers were killed outside their office in Sri Lanka's northeast — executed at point-blank range with automatic weapons in one of the worst attacks on humanitarians.

A decade on, justice remains elusive for families of the victims, all Sri Lankan nationals, says Action Contra La Faim (ACF), the charity where they worked.

"Our colleagues, four women and 13 men, were deliberately executed although they were clearly identified as humanitarian aid workers. It was an unprecedented massacre in the humanitarian sector, constitutive of a war crime," said Pauline Chetcuti, ACF's Head of Humanitarian Advocacy and Policy.

ACF has found evidence they were likely assassinated by Sri Lankan security forces and that their attackers must have been shielded by Sri Lankan top authorities, she said.

As aid workers across the globe gathered on Friday to mark World Humanitarian Day, paying tribute to those killed working on front lines of crises, experts say much more needs to be done to ensure perpetrators are held accountable.

In 2015 alone, 109 aid workers were killed, 110 injured and 68 kidnapped in attacks in countries such as Afghanistan, South Sudan, Yemen, Somalia and Syria, according to consulting group Humanitarian Outcomes.

Yet experts say few, if any, of the 148 attacks, which included physical and sexual assault, bombings, shootings and kidnappings, have been independently investigated and satisfactory justice served.

"An attack on an aid worker is an attack on humanity," said Unni Krishnan, director of Save the Children's Emergency Health Unit. "For people who are living in such extremely vulnerable and difficult circumstances, these aid workers are sometimes their own line of defense."

The "Mutur Massacre," named after the town where the killings took place, occurred on August 4, 2006 during Sri Lanka's civil war between separatist Tamil Tiger rebels and forces belonging to the majority Sinhalese-ruled government.

The mostly ethnic Tamil aid workers were providing water and sanitation to survivors of the 2004 tsunami when Tiger fighters launched an offensive against government troops for control of Mutur.

Trapped in their office, the workers lost radio contact with their head office.

Two days later, the bloated bodies of 15 aid workers were discovered face-down in the ACF compound, with bullet wounds to their heads and necks. Two other bodies were found in a vehicle nearby. They were killed possibly trying to escape.

ACF, which has campaigned for justice, says the Sri Lankan government investigation was biased and that it has deliberately attempted to avoid prosecuting its own forces.

But last September, the United Nations published its findings, concluding "there are reasonable grounds to believe that members of the security forces committed the extrajudicial executions of the ACF staff."

Yet the investigation remains at a standstill, ACF's Chetcuti said.

"There has been no indictment or prosecution. The authors of the crime are still free," she said.

"Families of the victims have made clear that justice is a key element to allow closure," she said. "They are suffering twice – from the crime and from the injustice that followed."

What happened in Mutur, however, is not exceptional. Across the world, many families of slain aid workers have had no form of redress.

This is especially true when victims are nationals of the country. Often violence is intensified where a government is incapable or unwilling to provide security for its population.

In recent years, hospitals and clinics run by aid agencies in countries such as Yemen, Syria and Afghanistan have been increasingly targeted by state forces as well as militants.

On Monday, a hospital run by Medecins Sans Frontieres (MSF) was hit in an air strike in northern Yemen, killing 19 people and injuring 24 others. It was the fourth and deadliest attack on MSF facilities there this year.

As a result, the medical charity said it was being forced to evacuate its staff from hospitals in Yemen, where civil war has raged for more than a year.

The charity said despite sharing GPS coordinates of its hospitals and clinics with the Saudi-led coalition government trying to quell Yemen's insurgency, aerial bombings of its health facilities continue.

In October last year, 42 people, including 12 aid workers, were killed when MSF's hospital in Kunduz, Afghanistan was hit in a US air strike. In response, the group demanded an independent humanitarian commission be activated.

Such a commission was never activated, and a US military investigation concluded the bombing was not a war crime and was caused by human error, equipment failure and other factors.

Sixteen service members faced disciplinary action over the air strike. Pentagon officials said payments of US$6,000 were made to victims' families and $5.7 million would be given to rebuild the MSF hospital.

"The number of hospitals that have been destroyed over the past years is utterly shocking," said Andre Heller Perache, MSF's head of programs and former head of mission in Yemen.

"It should warrant a unanimous outcry from world leaders, but this is not happening," he said. "If news of hospitals being destroyed, patients killed in their beds and doctors torn apart in bomb blasts happens with such frequency that it somehow becomes normalized, what does it say about our humanity?"

Experts say there is often no real follow-up because organizations may not be certain who the perpetrators are and the region may be too remote and insecure for aid groups to investigate further and find witnesses.

Attacks also happen in countries where law and order is not transparent and judicial structures are weak and susceptible to corruption. Often charities do not have the power to push for independent inquiries.

Adele Harmer from Humanitarian Outcomes, which publishes an annual report on aid worker security, said the group seeks to identify both motive and perpetrator when compiling data on attacks but found information was not always easy to come by.

Only about 60 percent of aid worker deaths can be attributed to a motive and perpetrator, said Harmer.

"The high profile cases like Mutur and Kunduz are clearer, but the vast majority are not high profile and are often utterly undocumented. As a result, it is incredibly difficult for organizations to do something about it."

Humanitarians say to reduce such attacks, aid groups must demand accountability and better monitoring of compliance to International Humanitarian Law to keep perpetrators from acting with a sense of impunity.

Creation of an independent special rapporteur for protection of humanitarian aid workers is under discussion at the UN and could be a welcome solution, they said.

"There is currently no robust, coordinated system in place to deal with this," said Krishnan. "It's just individual agencies when their own colleagues are attacked.

"It is desperately needed today due to the occurrences of more and more of such incidents."