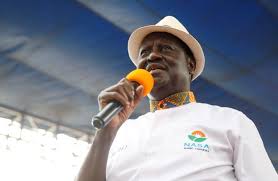 Kenyan prosecutors will charge the sister of opposition leader Raila Odinga and an opposition senator with incitement to violence after attacks on election board, the chief prosecutor’s office said on Monday.

Odinga has been due to compete against incumbent President Uhuru Kenyatta in a repeat presidential election on Oct. 26, but pulled out earlier this month, saying the vote would not be free and fair and calling for a boycott.

The pending charges against Ruth Odinga, a former deputy governor of Kisumu county, senator Fred Outa and unnamed others relate to that incident.

They include incitement, destruction of property, obstructing election officers and trespassing in an electoral center, according to a letter that the director of public prosecution’s office posted online.

Both Ruth Odinga and Outa were present at the protests, according to Reuters witnesses. Neither could immediately be contacted for comment.

“The suspects should immediately be charged,” the letter said.

The attacks on election staff stoked concerns about an outbreak of violence during the election.