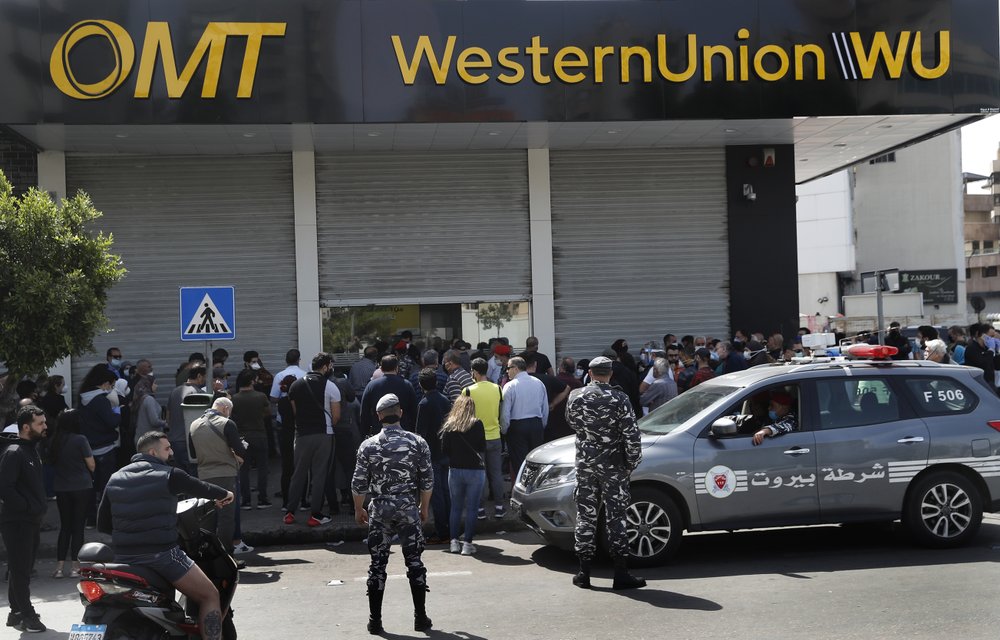 BEIRUT (AP) — Lebanon’s currency continued its downward spiral against the dollar on Thursday, reaching a new low amid financial turmoil in the crisis-hit country compounded by the coronavirus outbreak.

The currency crash came as hundreds of Lebanese — most of them wearing face masks but few keeping a safe distance — crowded outside money transfer offices Thursday, the last day that authorities allowed dollars to be dispensed to customers following new Central Bank rules.

The rules, detailed in a bank circular released this week, require banks to convert cash withdrawals from foreign currency bank accounts to the local currency, the Lebanese pound, at market rates determined daily by the bank. It wasn’t clear if the new regulations would impact foreign transfers as well.

The change is meant to ease demand on the dollar but has instead caused panic among the Lebanese, who have relied on a stable national currency that has been pegged to the dollar for nearly 30 years. The tiny Mediterranean country of about five million people has a large diaspora that sends foreign currency home or relies on transfers from here to students abroad. Also, many Lebanese keep their savings in foreign currency.

The Lebanese pound traded between 3,500 and 3,700 to the dollar on Thursday, a sharp jump amid general currency depreciation that began in March. It had been pegged to the dollar at 1,500 pounds since 1990, the end of the country’s civil war.

The Central Bank measure allowing only cash withdrawals in the local currency appears to have deepened the panic.

By evening, hundreds of protesters took to the streets in Beirut and other cities to denounce the policies of the Central Bank, ignoring regulations for social distancing because of the virus.

Maha Yahya, director of the Beirut-based Carnegie Middle East Center, said the new rules are an effective float of the currency but it is not yet clear how the banks will implement them.

“Practically they are admitting the market rate. The problem is when you do it on its own without a broader financial package, and not part of a larger financial and economic rescue package, you are basically triggering a rapid inflation,” Yahya said. “It is catastrophic for the Lebanese on multiple fronts. They are seeing their income disappear as well as their pensions at a much faster rate. This is at a time when the cost of living is increasing tremendously.”

Lebanon is facing its worst economic crisis in decades, including unprecedented unemployment levels and a severe liquidity crunch. The crisis has been compounded by a nationwide general lockdown, in place for over a month, to combat the spread of coronavirus. Prices of basic goods have soared — sugar for instance has gone up by nearly 67 percent. Consumer groups recorded a general 58 percent price increase on basic commodities since October.

The dollar is expected to continue to rise “so everybody now is hedging their bets and waiting,” Yahya said.

Lebanese have been taking to the streets since October denouncing the government and banks for their inability to address the liquidity crunch and the general economic malaise, and accusing them of corruption. The coronavirus pandemic has only intensified the economic slump.

“It is a game,” said Youssef Abdel-Al, who stood in line outside a money transfer office in Beirut, accusing the banks and the political class of ignoring people’s rights.

Banks have taken other measures to stop a run on deposits, including closing for two weeks last year, limiting withdrawals and money transfers abroad.

The Cabinet is expected to meet on Friday to discuss an economic and financial rescue plan that has sparked a political debate.

Lebanon, which has recorded 22 deaths from 688 reported coronavirus cases, has been in lockdown since mid-March, a measure that will likely be extended. The national airport and the country’s borders have been shut, as well as public institutions, restaurants and schools.

Image: Lebanese citizens queue outside a Western Union shop to receive their money transfer in US dollar currency, after the Central Bank circular issued this week, money transfer houses and banks are required to convert foreign currency transfers and cash withdrawals from foreign currency bank accounts to local currency at a market rate, in Beirut, Lebanon, Thursday, April 23, 2020. Lebanon’s currency continued its downward spiral before the dollar on Thursday, reaching a new low amid financial turmoil in the crisis-hit country. (AP Photo/Hussein Malla)