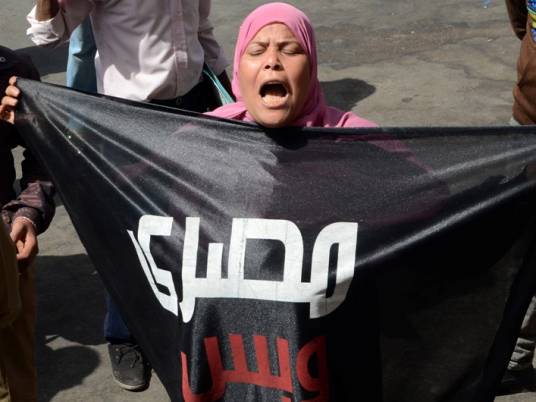 A new law governing protests, approved in principle by the Shura Council Tuesday, has sparked anger among the opposition's political forces.

Meanwhile, the law’s supporters, who are mainly Islamist factions, said the legislation is a necessary measure to curb chaos and lawlessness.

The Shura Council, which took over temporary legislative powers late last year after the passing of the Constitution, approved the draft law prohibiting citizens from organizing protests that "pose a risk to the nation's security."

Organizers of protests must submit a written notification to police three days in advance of the planned demonstration.

The proposed law also stipulates that protesters must be 200 meters away from government and judicial buildings.

Anyone found guilty of violating the law will be sentenced to hard labor in prison and fined at least LE50,000.

Shura Council speaker Ahmed Fahmy said Thursday said the law has not been ratified and would be discussed at hearings, where experts will have a chance to weigh in on the controversial bill.

He also stressed that the law will not be ratified until there is consensus among the country’s political forces.

But that is not enough for opponents who spoke to Al-Masry Al-Youm Wednesday.

Egyptian Democratic Party leader Zyad al-Elelaimy said the bill is a tool to prevent demonstrations and muzzle the opposition.

"The [Hosni] Mubarak regime continues, but in the form of the Muslim Brotherhood. Morsy should not follow Mubarak or he he’ll face the same fate," Ellaimy added.

Tarek al-Khouly, founder of the unofficial April 6 Party, said even Mubarak's government would not have dared to pass such a law as it violates international conventions, which protect citizens’ right to peaceful protest.

A number of National Salvation Front leaders also denounced the bill, saying protesters will not abide by it.

Sameh Ashour, NSF member and head of the Nasserist Party, said the Muslim Brotherhood is hoping to create a dictatorship by passing this law, which he dubbed the "law on prohibiting demonstrations."

Abdel Ghaffar Shokr, undersecretary of the Socialist Popular Alliance Party and NSF leader, said, "In democratic countries, laws are drafted to ensure freedoms as well as the freedom of expression, but in Egypt legislators issue laws that restrict these freedoms."

Ehab al-Kharrat, head of the Shura Council's Human Rights Committee and the Egyptian Democratic Party, said that the draft legislation is chock-full of shortcomings that allow security authorities to interpret the law as they wish.

In response, a number of Islamist party leaders said the law would prevent thuggery and chaos, which have plagued the nation’s streets of late.

Furthermore, the law will not restrict or hamper citizens’ freedom to demonstration as some claim, said Muslim Brotherhood lawyer Abdel Moneim Abdel Maqsoud.

Khaled al-Sharif, spokesperson for the Jama'a al-Islamiya's Construction and Development Party, added that the law will preserve national interests and protect citizens against banditry and traffic disruption.