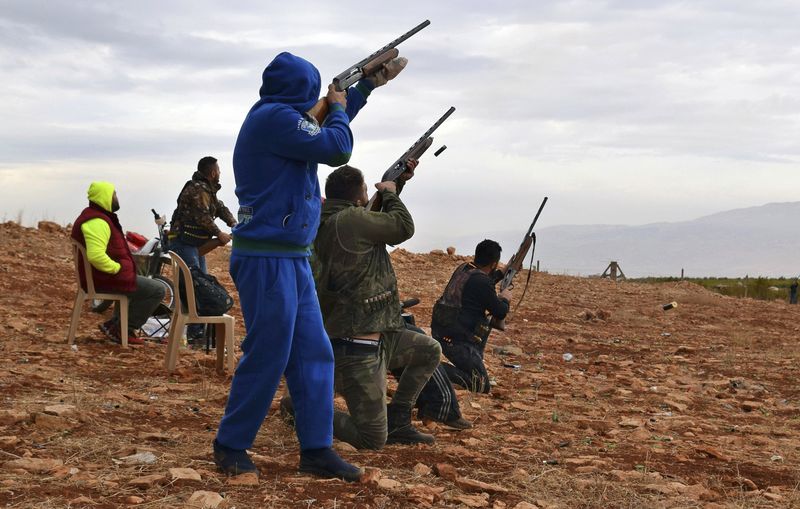 To bird lovers, the scenes are upsetting. Dozens of dead buzzards lie on a carpet of feathers on a rocky hill in northern Lebanon. Hunters pose with their catch — scores of calandra larks, known for their melodious birdsong, arranged neatly on the hoods of their Land Rovers.

Great white pelicans, protected both in Europe and Lebanon, soar overhead, then with a crack of rifle fire, tumble down into the shrubs below.

Posted on Lebanese social media in recent months, the images point to the enormity of the task facing authorities as they try to clamp down on hunting practices more at home in the “Wild West” than a country run by law.

Lebanon lies along key migratory routes for millions of European birds, including protected and endangered species, that winter in the Persian Gulf and Africa.

But even with a new law in place banning the hunting of protected species, conservationists say overhunting in Lebanon is undermining their efforts.

“Everybody hunts and they’re not going to be able to put limits on it,” said Wissam Arif, a hunter from Lebanon’s eastern Bekaa Valley. “Sure, there should be licenses, but no one does anything about it.”

A 2015 study by the conservation society Birdlife International estimated that 2.6 million birds are shot down in Lebanon each year. Per capita, that’s second most in the eastern Mediterranean region, after Cyprus.

“European birders have invested a lot of time, tax money, and other resources to protect the last remaining breeding pairs, and this is all for nothing if the birds don’t fly back,” said Axel Hirschfeld, of the Germany-based Committee Against Bird Slaughter.

Conservationists credit Lebanese Environment Minister Tarek Khatib for bringing into force a 2004 hunting law that, they say, is as strict as any in Europe.

Last September, Khatib opened the country’s first official hunting season in at least two decades, with the requirement that hunters take tests to get their licenses. The ministry awarded more than 18,000 hunting licenses.

But a month later, hunters from the town of Brital in the Bekaa Valley set up electronic bird callers and spinning lures to coax the birds down – a technique prohibited under the law.

None of the hunters in the valley could show a license to an Associated Press crew visiting the area, and nearly all declined to be identified by name because of the new hunting regulations.

A 53-year-old local said he would shoot down between 100 and 150 skylarks and chaffinches on a good day, but high winds and an intermittent drizzle meant he would catch just a fraction that morning. The legal limit is 50 per hunt.

In Lebanon, these small birds are typically prepared in a frying pan with a marinade of pomegranate molasses, wrapped in warm pita bread and eaten whole — the tiny bones giving the delicacy a pleasant crunch.

“That’s a hawk,” said a police deputy, pointing over the crop-less fields. The bird swayed as a rifle shot rang out, but stayed in the sky. “They shouldn’t be shooting that.”

The deputy, who was also hunting that day, said he was assigned to prison duty and that it wasn’t his job to enforce hunting regulations.

Nearly every man hunting that morning had some sort of connection to the security forces – including a police investigator who said he would not report his friends.

But as this hunting season draws to an end next week, Khatib said he was positive about the law’s impact.

“They are beginning to follow the law … we’ve created a cultural change among the Lebanese,” he told the AP.

For many Lebanese, hunting is a tradition passed down from father to son and an autumn ritual for men to pass weekend nights with friends before hunting at dawn. Smaller birds are usually cooked and eaten but the larger ones, including migratory birds, are shot just for sport.

“They bring in all types of birds,” said Rabih Danaf, a taxidermist in the town of Bhamdoun, 23 kilometers (14 miles) east of Beirut. “The hunters make a mockery of the law.”

Danaf’s Facebook page displays stuffed harriers, pelicans, storks, falcons and colorful hoopoes — including at least two ringed in Europe for scientific study, according to Hirschfeld, the German conservationist, who said he checked the tags in an international database.

There is no law against taxidermy, said Roger Saad, an activist with the Lebanese Bird Conservation Coalition.

Saad, who manages a hardware store in an industrial district in eastern Beirut, keeps a handwritten list of the hunting violations he has seen on social media and those that have been reported to him through the Coalition’s network.

An amateur sleuth, he has reported more than 70 cases to the Environment Ministry, including data on alleged violators. He said he was pleased to hear some have been fined, while others have gotten away with just a warning.

The Environment Ministry says it has forwarded some 40 cases to prosecutors for legal action, and it encourages the public to report violations directly to the police. Khatib said he is waiting for Parliament to allocate funds for a ranger force that would enforce hunting laws.

In a country plagued by rolling power cuts and a trash-strewn coastline, many Lebanese shrug off concerns about overhunting.

“People think: ‘It’s not connected to me, so it’s not my problem,’” said Saad. But birds hunt pests, which in turn helps farming — the fifth largest employing sector in this tiny country.

With elections slated for May, a new government could mean changes at the Environment Ministry, disrupting conservation efforts.

“We have birds passing through here that do not pass through anywhere else in the world, and instead of looking at them, we shoot them,” said Saad.

“Someone needs to speak for them.”

US, Canada to investigate deaths of endangered whales

In a Norwegian Wood, a 22nd century library grows