Facebook Twitter LinkedIn
Mohamed Saeed, a 23-year old man, complained to Al-Masry Al-Youm about the decline of the papyrus craft in Qaramous village, Sharqiya, which has left him unemployed among millions of other youth in Egypt.
Saeed, a resident of Qaramous, told Al-Masry Al-Youm that he used to earn LE2,000 per month when he was under 10 years old from making papyrus paper.
Despite being a small village, Qaramous was one of the centers of papyrus production that formed a link between a great civilization dating back thousands of years ago and a present that derives its life and future from heritage. 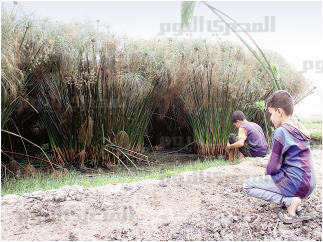 Two children play near the papyrus plants.
Saeed graduated from the Faculty of Mass Communication, Al-Azhar University, but has not worked in the field of media because he loved and excelled at papyrus making since he was a child.
"How can I leave a craft I lived on and mastered over 11 years ago to work in media which I studied only for four years?" Saeed said.
"After the 25 January revolution, the conditions of the country deteriorated and tourism collapsed, causing the our demand to shrink and filling Qaramous with thousands of unemployed people," said Saeed. 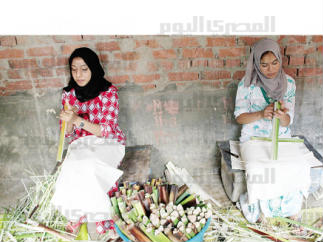 Two women peel and prepare the papyrus plants for pressing.
"I and other young people have been waiting for conditions to improve. When I and dozens of young people lost hope, we decided to work in a factory at the 10th of Ramadan City," said Saeed.
Saeed left his job at the factory after six months because the effort he exerted was not worth his monthly salary of LE1,000.
"I preferred to be unemployed until the situation improves and we get back to the cultivation and manufacture of papyrus again," he said.
In 2010, Egypt received more than 14.7 million tourists, but then the number dropped to 9.8 million tourists after the 25 January revolution. The situation relatively improved in 2012 as the country received 11.5 million tourists, before it declined in 2013 to 9.5 million tourists, according to official data. 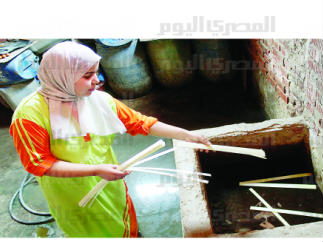 A worker soaks the papyrus plants in water.
Saeed explained the crisis experienced by the residents of the village, as papyrus manufacturing is a tourist commodity affected by tourism rates.
The skyrocketing of the prices of materials and chemicals used in the industry also caused the recession, he added.
"After being the first village to crash into unemployment in Egypt, we now have no source of income," said Saeed. "Only 15 acres out of 500 acres used in the cultivation of papyrus are left." 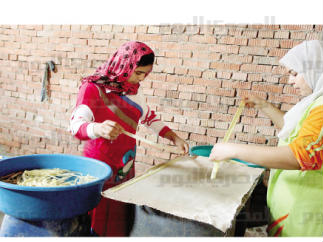 Women arrange papyrus strips before pressing and drying.
"The papyrus paper craft had a spiritual father who is Dr. Anas Mostafa. He was one of the villagers who brought papyrus during a trip to Aswan in 1976 to the village. He then decided to cultivate papyrus on a small piece of land at his home, before the plant spread throughout the village," according to Saeed.
Men were responsible for the whole process at the beginning before women became involved as well, Saeed pointed out. "We used to employ people from other villages due to demand on the papyrus paper," he said.
The situation in the village has completely changed, as tourism revenues have now fallen by 24.7 percent in the first half of 2014, according to the Tourism Ministry. "In the 1980s, each gallery earned up to LE100,000," said Saeed. 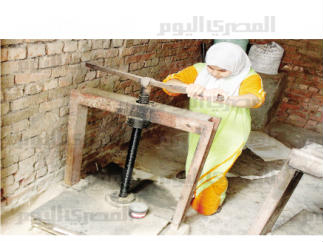 A worker presses the papyrus strips.
Saeed suggested that the Ministry of Tourism, in coordination with relevant ministries, should allow tourist groups to visit the village and witness the manufacture of papyrus paper as means of promoting tourism.
Mohamed, a 40-year-old resident, called on the government to establish international tourist exhibitions for the papyrus under the supervision of the TMinistry of Tourism.
Mohamed also called for providing the chemicals and other equipment needed for papyrus cultivation as he says the government is currently neglecting the craft and does not list the papyrus among other strategic crops.
Tags
papyrus Sharqiya tourism unemployment