Following a years-long absence of beauty competitions in the Red Sea resort city Sharm el-Sheikh, the Miss Intercontinental competition sees a dazzling return this year starting from December 6 until December 20. 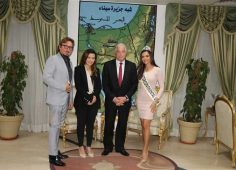 The meeting saw consultations to decide which tourist resort will host the competition this year. There are plans for 82 countries to participate in the competition, alongside accompanying global media delegations for each country.

The organizer of the competition announced that the city of Sharm el-Sheikh was chosen following close competition with an Indian city.

Sharm el-Sheikh won out because of its distinctive weather, wonderful climate and scenic tourist destinations.

The governor welcomed the competition in this city of peace, which highlights the city to international media. Pre-pageant activities started on January 10, while the coronation night was on January 24 at the Sunrise Grand Select Crystal Bay in Egypt.