While wandering on the beaches of Dahab city, South Sinai, you will always notice dozens of people practicing a sport known as kitesurfing.

This requires putting on a belt connected to a kite through lines of average length of 20 meters controlled using the kite tape, along with a wooden board attached to the foot, where the force of the wind is used to pull surfers across the water, among whom was Shokr Ahmed, 32. 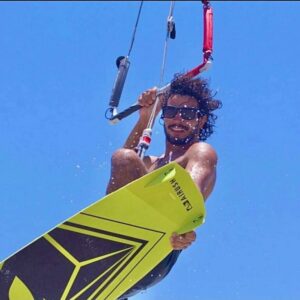 Shokr, the certified international kitesurfing coach, started the sport since he was 16 years old, with a love of mastering water sports, such as water skiing, sailing and kitesurfing. “I decided that I would develop myself in it to advanced stages,” he said.

With the early hours of the morning, Shokr, who is a Faculty of Law graduate, wakes up to start practicing the modern sport of Kitesurfing in Egypt, as he put it. He added that “the morning time is better for air currents,” which helps him play, adding: “the days when there is no air current there are theoretical exercises for the students.”

The sport of kitesurfing began in the early seventies of the last century by two French surfers, and the shape of the kite evolved at the beginning of the eighties, until it reached the current shape, according to Shokr, who believes that kitesurfing is not widely spread in Egypt, because it lacks support and marketing. 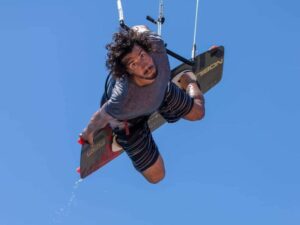 He says: “Learning this sport does not require a strong level of physical fitness. The trainee does not need good arm strength, because he is attached to the kite from his waist through a belt and uses his arms only to maneuver the kite that does not require great strength.”

Regarding the appropriate age to practice this sport, Shokr explained that 8-years-old is the best age to start learning kitesurfing, noting that his dream is to help spread the sport and break the barrier of fear among people, and to attract tourists from all over the world to practice it in Egypt.

“It is very interesting, feeling that you are walking on water or flying in the air is a feeling I wish all visitors to Dahab experience,” he said.