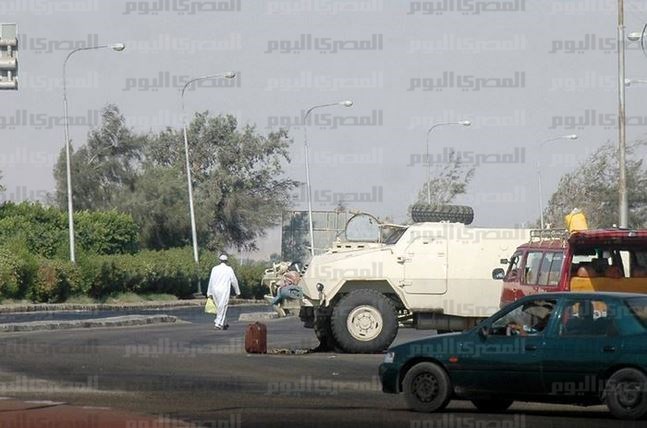 A police officer was injured during curfew hours on Tuesday in an IED blast in Arish that targeted his armored vehicle.
Curfew is imposed in Arish from 1 a.m. to 5 a.m.
According to eyewitnesses, unidentified assailants planted a bomb on the side of July 23 Road in downtown Arish. The bomb exploded and hit the armored vehicle as the officer was checking security during curfew.
Captain with the Central Security Forces, Hossam Eddin Othman, 26, was injured and was transferred to Arish's Military Hospital, said the eyewitnesses.
Eyewitnesses also said the front windows of a number of shops were destroyed and goods were damaged.
The perpetrators escaped from the scene of the incident with a vehicle, eyewitnesses said.
Checkpoints were set up along main roads and squares to inspect cars following the incident and more security forces were deployed on streets and security was intensified at the entrances and exits of the city.
A crackdown was conducted in Masaeed neighborhood to arrest wanted fugitives, said security sources.

Security forces discovered an IED that was planted by unidentified individuals in Kharouba area, west of Sheikh Zuweid. They destroyed it from a distance using gunfire, the sources added.
Edited translation from Al-Masry Al-Youm