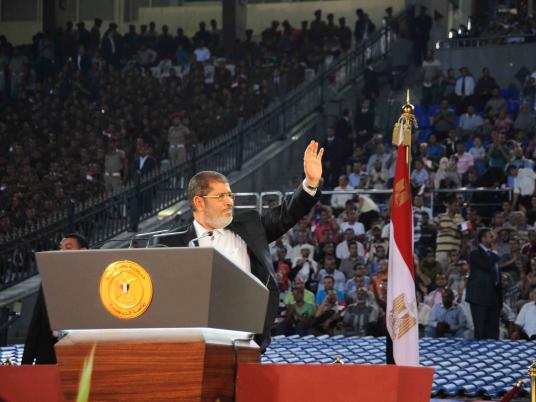 Under the new declaration, presidential decisions are immune from challenges in court, and the Constituent Assembly and the Shura Council — which are controlled by an Islamist majority — are protected from judicial disbandment.

Morsy also appointed a new prosecutor general, who has ordered the retrial of figures from the former regime figures charged with killing demonstrators during the January 2011 revolution, including former President Hosni Mubarak and his Interor Minister Habib al-Adly.

The Judges Club is holding an emergency general assembly to discuss the president’s decisions, while a judicial source within the club said the judges may suspend the work of the courts or refuse to supervise any future elections in response.

“The revolution is aborted until further notice," wrote on Twitter Mohamed ElBaradei, head of the Constitution Party. He added that Morsy’s decisions are a blow to the state and to legitimacy.

Former MP Mohamed Abou Hamed, who led protests against the president in August, tweeted: “We will not allow the rule of law to be dropped,” adding that Morsy granted himself unconstitutional powers.

“The country is looking for solutions while the president is creating problems,” tweeted Hamdeen Sabbahi, a former presidential candidate, who also wrote that the president's decisions are a coup against democracy and constitute a full monopoly of power. “The revolution will not accept a new dictator."

Amr Moussa, leader of the Popular Congress Party, called on all political forces to meet and discuss these decisions, which he considered a new massacre of the judiciary and a challenge to popular will.

“I would have liked to dismiss the prosecutor general without dismissing the rule of law," tweeted activist Basil Adel.

On the other side of the spectrum, Yousry Hammad, vice president of the Salafi Nour Party, said that Morsy’s decisions are revolutionary, long overdue and meet the demands of the revolution. “The people rebelled on January 25 to demand the toppling of a system, not the just the head of that system,” he wrote on Facebook.

He added that the former prosecutor general hid reports and evidence incriminating the killers of the demonstrators. The prosecutor general had been blamed by a range of political actors for the failure to bring those responsible for the killing of protesters to justice.

Mohamed al-Beltagy, a leading figure of the Freedom and Justice Party, criticized those who defend the former prosecutor general. “They are defending the structure of Mubarak’s regime,” he wrote. “The revolution marches on with the dismissal of the prosecutor general and the retrials.”