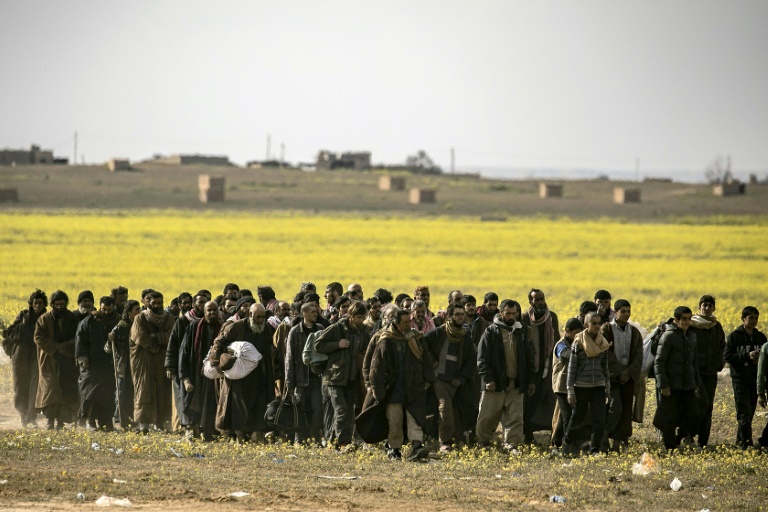 US President Donald Trump’s decision to take custody of dozens of high-value Islamic State militants from the under-siege Kurds avoided their possible release but raised the pressure on Washington and its allies to accept them for trial.

Until now Trump had repeatedly refused to take responsibility for any of the fighters, but announced Wednesday that, as Turkish troops were invading northeastern Syria, the US was taking over custody of “some of the most dangerous ISIS fighters” from the Syrian Democratic Forces.

They included two notorious British Islamic State fighters who were part of a four-man kidnap-and-torture cell known as “The Beatles,” which beheaded captives, including foreign journalists and aid workers.

According to media reports, US forces planned to assume control of several dozen captured Islamic State fighters from SDF camps to prevent their escape.

That could accelerate the need to resolve the problem of an estimated 2,000 IS foreign fighters, and 8,000 local IS militants, that have been held by the SDF since coalition forces crushed the jihadist army earlier this year.

French Foreign Minister Jean-Yves Le Drian called Thursday for an emergency meeting of the US-led coalition against the Islamic State to address the detainee challenge.

“The international coalition should meet because we are in a new situation and because the fight against Daesh risks reigniting as Daesh was waiting for this opportunity,” Le Drian said, referring to IS by its Arabic name.

‘The worst of the worst’

With the SDF threatening to abandon its detainee camps in the face of the Turkish siege, US forces have moved to sequester the most dangerous jihadists.

“We have taken a certain number of ISIS fighters who are particularly bad and we’ve wanted to make sure nothing happened to them with respect to getting out,” Trump said Wednesday.

“In case the Kurds or Turkey lose control, the United States has already taken the 2 ISIS militants tied to beheadings in Syria, known as the Beetles, out of that country and into a secure location controlled by the US,” Trump tweeted.

“They are the worst of the worst!”

Britain has refused to assume responsibility for the two “Beatles,” Alexanda Kotey and El Shafee Elsheikh, not wanting to risk domestic turmoil by repatriating them.

Now expectations are that they will be sent to the United States to stand trial for the murder of American journalists James Foley and Steven Sotloff and US aid worker Peter Kassig.

“They have been moved out of Syria and are in a secure location,” a US official said, without identifying where. “They are being held in military custody pursuant to the law of war.”

But they are only two of hundreds of ISIS fighters considered still extremely dangerous. Many countries feel putting them on trial at home could inspire fresh domestic jihadist attacks.

France has handed some French IS fighters over to Iraq for imprisonment.

“Many of them came from Europe, but they should go back to Germany, France,” Trump declared Wednesday.

“We said we don’t want them either, but somebody has to watch over them,” he told reporters. “We did you a favor, take your people back.”

Fionnuala Ni Aolain, a special rapporteur for the UN Office of the High Commissioner for Human Rights, called for the establishment of a systematic process for repatriating them.

“Despite growing international calls to address the problem, Western countries have done little to address it,” she wrote Tuesday on the Just Security website.

“An effective return process is the only meaningful way we are likely to hold individuals accountable for the serious and systematic crimes committed in Syria and Iraq.”

Hina Shamsi of the American Civil Liberties Union said IS prisoners cannot be left indefinitely in US military hands, either. The US must quickly repatriate them to their home countries or to the United States to stand trial in the federal criminal justice system, she said.

“The military must abide by both domestic and international law, and not repeat the costly legal, moral, and strategic mistakes of abuse and unfair trials,” she said.