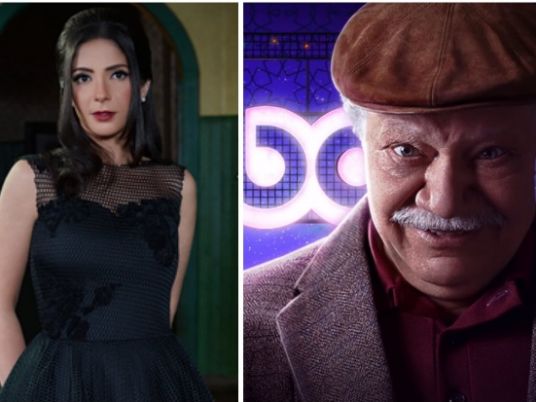 all the expectations, with several high-quality productions on offer, featuring some intriguing storylines and the rediscovery of existing stars like Yahia al-Fakharany and Yousra.

Among the most contoversial dramas was "Wanoos", with writer Abdel Rahem Kamal providing an opportunity for Fakharany to display his talent for evil in the title role. Throughout most of his career, Fakharany has taken the part of the good guy, but in this tale he reaveled his dark side.

The main aim of the series is to present the conflict between man and Satan, showing the latter in various attempts to ruin people's lives, mainly through offering temptations. Fakharany plays the role of the Devil (Wanoos), appearing to a man named Yakoot in the body of his old friend who had died.

At the beginning of the series, Yakoot leaves his four children and wife of more than 15 years after committing some big sins, including murder. After a while, Yakot repents and tries to keep himself away from Devil's temptations. However, Wanoos appears to Yakoot's family, attempting to seduce each one and ruin their lives.

"We had a similar experience with the same idea in the 1960s with the movie "The Woman who Defeated the Devil", which was originally a novel written by Tawfik al-Hakim. The drama Wanoos shows the "Satan" who appears to people who have ambitions in life, and he convinces them that listening to his temptations will make their dreams come true," culture critic Nader Adly tells Egypt Independent.

According to Adly, the depiction of the Devil in drama creates a spirit of fantasy, revealing the social and moral disorder in society, which was one of the main aims of the writer. Adly believes that the popularity of Fakharany, along with Nabil Al-Halfawy (Yakoot), has succeeded in creating a good presentation of "good versus evil" that appeals to audiences.

Echoing Adly, the cinema critic Tarek al-Shenawy hailed the script, which he said raised many perspectives and viewed things from a different mindset. He also praised the performance of the cast, especially Fakharay, who he said was key to the program's success.

"The role of devil is not easy at all. I think if there were no Fakhranay, there would be no Wanoos," Shenawy tells Egypt Independent.

One of Ramadan's most loved dramas is "Grand Hotel", in which  the elegance of the 1950s era is portrayed by way of some truly civilized and creative performances. This is a professionally presented drama that keeps viewers glued to their TVs day after day.

The series, which was filmed in the Old Cataract Hotel in Aswan, is a gripping tale of love and crime built around the family that owns the Grand Hotel. The story begins when Ali (played by Amr Youssef) drops by the hotel to search his sister. Ali falls in love with Nazly, a daughter in the hotelier family, then finds himself party to a secret that may threaten the hotel's ownership.

Adly says the series concept is not entirey original, but no less gripping for that.

"Grand Hotel was copied from a Spanish series and I feel it's quite traditional," he says. "But it's well written and differs from other Ramadan dramas in the fascinating location, images and clothes, along with the feeling of the concealed crime within the scenes."

Shenawy says that Grand Hotel's script is true to the details of the historical era, presenting a simmering conflict within the context of elegant actions and surroundings. In fact, says Shenawy, it's that contrast between calm elegeance and secret rivalry that makes for such gripping tension.

"It all conflicts with the historical era, the series decorations, the music and the cast performances — which were perfect, especially the actor Salma al-Sherbiny, who played the role of Ward, one of the hotel servants and a leading role in the drama," said Shenawy.

Indeed, the scene in which Ward gives birth was the topic of much debate on social media last week, with the actor winning high praise for her portrayal of labor pains.

Mohamed Mamdouh has won praise also for his role as Loyal Amin, displaying his fine talents as a versatile actor capable of adapting to any role.

Based on the famous novel by the Nobel prize winner Naguib Mahfouz, the events of "Afrah Al-Qobba" (Joys of the Dome)  take place inside a theater during the 1960s and 1970s. A group of actors reading a new play script discover that the play revolves around the real stories of their lives behind the scenes. The author of the play presents their shameful secrets from the past, and despite the actors' attempts to stop this scandalous play, the theater manager insists on completing the work in order to wash away the sins of the past.

The drama is professionally performed by a group of illustrious stars, including Mona Zakia, Eyad Nasar, Sawsan Badr and Seba Mubarak.

"For me, it's the most successful drama this Ramadan," Adly says, "because all the elements are covered, and it's the only series in which you feel the actual presence of the director."

He explains that the director Mohamed Yassin succeeds in presenting the wide range of feelings and situations of this varied bunch of characters. Moreover, the director conveys his own experience with the theatre in the 1960s.

"Afrah Al-Qobba is one of the most valuable dramas, characterized by a range of enjoyable scenes and a professional cast," Adly said.

Shenawy says there is a fresh and distinctive quality to the drama, with director Mohamed Yassin providing a gripping story in the spirit and style of the great novelist Naguib Mahfouz. He says Afrah Al-Qobba is an integrated work, including  soundtracks from Hisham Nazeeh and a caste that provides exceptional performances.

"Fook Mostawa Al-Shobhat" (Above Reproach) highlights the two side of each person — the good and bad — showing how a child's upringing can weigh on their behavior, even making a dangerous killer of a well-mannered university professor.

Yousra is one actress who made a surprisingly strong comeback this Ramadan, recovering fully from the failure of her Saraya Abedin series in Ramadan 2014, in which she took the leading role. Using strong, aggressive body language, Yousra manages to deviate from the norm in her long career, at last playing a baddie in the form of the evil Rahma.

Adly says Yousra's performance this year was the most attention-grabby spectacle for audiences. Yousra seeks to show that people are often evil due to their poor upbringing, and since she conveys this so well, viewers feel sympathy for the character, he says.

"It's a kind of detective thriller drama that targets a specific social level."

While Shenawy says that Yousra is perfect in showing how evil can be hidden beneath the veneer of goodness, a difficult task for any actor, but something that Yousra manages well.