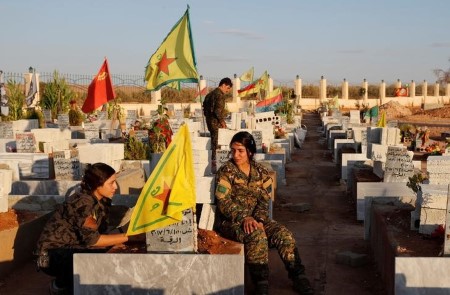 Russia has invited the Kurdish-led authorities in northern Syria to its proposed congress of Syria’s rival parties, a senior Kurdish official told Reuters on Tuesday.

The congress would focus on looking for “compromise solutions towards the political settlement” more than six years into Syria’s conflict, a Russian negotiator has said.

“We are studying the issue and our stance has been positive so far,” said Badran Jia Kurd, an adviser to the administration that governs Kurdish-led autonomous regions of northern Syria.

They received the invitation at meetings with Russian officials in northern Syria last month and favor the idea as it strives for a political end to the conflict, he said.

Throughout the war, the main Syrian Kurdish parties have been left out of peace talks at the request of Turkey, which views the Syrian Kurdish YPG militia as a security threat on its border.

Since 2011, the YPG and its allies have carved out cantons in the north and now hold at least a quarter of the country. They have seized much ground by fighting Islamic State militants with the help of the United States.

Moscow, a key ally of Syrian President Bashar al-Assad, has sought to lead diplomatic efforts between various warring Syrian factions over the past year.

Russia may host a congress in mid-November to bring together all of Syria’s groups for national dialogue and work on a new constitution, the RIA news agency said on Monday.

It remains unclear which other groups or combatants in the multi-sided war would take part.

Russian President Vladimir Putin, who first mentioned the congress this month, has said it would include “all ethnic and religious groups, and the government, and the opposition”.

Russia’s Hmeymim air base in Syria also might be used, said Alexander Lavrentyev, a senior Russian negotiator on Syria. The proposal has received backing from the United Nations, Lavrentyev told reporters in Kazakhstan on Monday.