A crime is being committed in Cairo’s main train station. For years, Egyptian academics and state planners have been re-discovering the glory of “Khedival Cairo.” One after another, different state and private groups claimed to protect Cairo’s modern heritage. But these groups became no more than a charrette, communicating through occasional meetings, emails and even holding competitions for the redesign of some of Cairo’s iconic structures and squares.

The meetings, emails and competitions have not succeeded in creating awareness (outside a small circle of interested academics) of Egypt’s modern heritage. Nor have they succeeded in protecting iconic buildings. But their deepest flaw has been their failure to produce a legitimate institutional body tasked with conferring historic status on deserving buildings, and protecting them accordingly. The very categories "modern" and "historic" remain contested as there is no authority, governmental or otherwise, with a mandate to protect Egypt’s modern heritage.

Cairo’s train station is case in point. Known to many as Bab al-Hadid or, more commonly, as Ramses Station, it is one of Cairo’s well-known historic buildings. An older station was opened at this site in 1854 following the construction of the first railway line in Africa, linking Cairo and Alexandria. It was not until 1890 that the Egyptian government, driven by a desire to give Cairo the grand entryway it deserved, built the current, much larger railway station. For most visitors, Ramses station became the entry point into Cairo after arriving in Alexandria by ship.

The 1890 building bore structural resemblances with its counterparts in any industrialized European capital. Its façade and interior hall however were decked out in eclectic neo-Moorish motifs with rich blue mosaics adorning complex patterns. The main hall, with a symbolic gate at its apex and its iron truss structure supporting its roof, was a cultural and political stage for modern Egypt. It was here that Egyptian feminist Hoda Shaarawi publicly removed her veil upon returning from a women’s conference in 1923. It was here that Hind Rostom sold sodas in Youssef Chahine’s 1958 psycho thriller Cairo Station. It was here that the famous Reda dance troupe recorded some of their most memorable film pieces in the 1960s. It was here that Nasser rolled the welcome carpet for visiting foreign dignitaries. And it was here that millions of ordinary Egyptians arrived in Cairo over the years in hopes of building a better future.

Today this building, with all its history and memories, is under assault. It has been under “renovation” since the celebrated removal of the Ramses statue in 2006 from the main square just outside the station. In a manner typical of Mubarak-era renovation projects for public buildings, the pace of work was interminably slow, having taken as much time as the construction of Burj Khalifa in Dubai.

Since Mubarak’s ouster the pace of work in the station has picked up but the results so far are disconcerting. The building exterior has been simply painted, with few if any other alterations, and the interior has been completely stripped. The main hall is encased in an unnecessary glass vetrine and the walls are decorated with floral plaster forms that hover above head. What used to be an open and airy station hall is now crowded with ten thick columns that support an unnecessary false ceiling. The inside of the station is clad with the same kinds of granite that adorn every Mubarak-era public building. The floors too have been re-surfaced with this slippery material. All these changes have completely deformed the historical design of the station.

This renovation effort raises critical questions about how the Egyptian state deals with Cairo’s urban and architectural heritage. How can such an iconic building be so drastically altered without any transparency or public knowledge of the intended design? Why are there no avenues of participation for concerned citizens who are interested in contributing to such a project? Why is there no government agency to protect the architectural character of such buildings? Where is the oversight that manages the construction quality, the design and the public funds that are being used? And how much public money has this “renovation” cost?

The practices described above do not fit into any convention of renovation or restoration and have failed to improve the functionality of the building. What is being done to Cairo’s train station is nothing short of a waste of public funds, through which some contractors are probably making a hefty fortune.

Without a doubt, Ramses station needed a facelift. Instead, its status as a national heritage building is being destroyed. Across Egypt, one can probably find similar projects, involving deals between officials and construction companies. While the local press have kept Egyptians focused on what to rename the metro stop beneath the train station (formerly named after ex-President Hosni Mubarak), a real calamity is taking place above ground that should be met with an equal degree of public outrage.

Mohamed Elshahed is a doctoral candidate in the Middle East and Islamic Studies Department at New York University.

Photos – Gezira House: first building in Zamalek to restore its splendor after 111 years 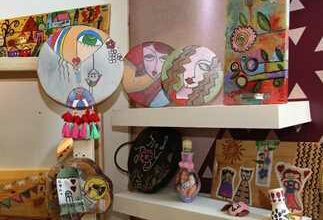