Establishments like the Cairo Jazz Club have their own natural rhythm. The heart of the evening at this venerable nightspot doesn’t really get going until around 11 PM. But on Saturday, things were a little different. By 8:30 PM, it was almost impossible to find a seat.

“To have that many people show up at the Jazz Club at 8 PM was incredible,” said club manager Shady Hamza. “It’s very interesting to see that people were willing to come out and see something like this.”

The event in question was the Jazz Club’s first ever stand-up comedy night–part of a slowly growing trend as the slightly alien art form takes root in Egypt.

“It’s gaining momentum,” said Mohammed Shaheen, a 29-year-old network engineer who was the opening act of the three-comic event. “I really believe it’s going to grow in Egypt. There’s a huge market for it.”

Technically, stand-up comedy, or something akin to stand-up comedy, has a history in Egypt, with “monologists” such as comedian actors and icons Ismail Yassin, and Shekoko being popular in the early part of the 20th century. But somewhere in the last 50 years the tradition largely died out. Egypt continued to produce dozens of iconic comedians from the time of Ismail Yassin until now, but their work has been channeled through movies and noisy slapstick plays.

The new trend, as witnessed at the Jazz Club, is more related to Western-style stand-up comedy that grew out of the American Vaudeville tradition. Stand-up in the US has mushroomed into a massive industry with dedicated comedy clubs across the country.

The quartet achieved fame in the US, traveling as the Axis of Evil Comedy Tour. Recently, they’ve begun performing both together and separately throughout the Middle East, including regular gigs in Cairo, Beirut, Dubai and Amman. And in many stops, they’ve made a point of holding open tryouts to encourage and develop local talent.

Sherif Zaher, who performed at the recent Jazz Club comedy night, got his first taste of being in the spotlight thanks to one of those talent initiatives. The 29-year-old was encouraged to enter tryouts when Obeidallah and company performed a show at the Cairo International Convention Center in 2008. He won the competition and received the chance to perform briefly on stage.

Now Zaher, who works in asset management, dreams of going full time. But it’s going to take a while before that’s an option locally.

“There’re no comedy clubs in Egypt. It’s just you by yourself,” said Shaheen, who estimated there are 15 stage-ready Egyptian comedians trying to gain experience with gigs every few months at parties, clubs or venues like the Sawy Center in Zamalek. On a parallel note, stand-up comedy shows are currently aired on local comedy television channels.

“We need a comedy club or a big sponsor,” said Zaher, who has tried to convince friendly club managers like Hamza to establish a regular weekly or monthly stand-up comedy night.

“It’s going to be very gradual. It will still take time for people to catch up to it,” he said. “I’m excited about the idea and I want to be part of its growth.”

Trump under investigation for obstruction of justice 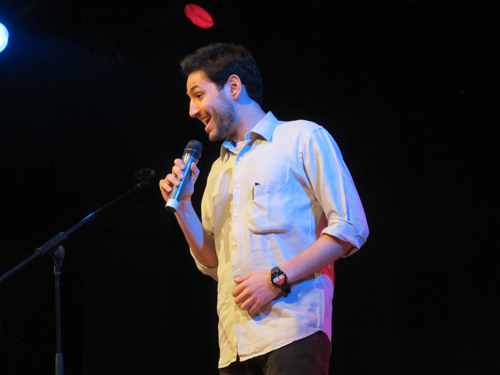 Celebrating 20 years of art at Mashrabeya