Facebook Twitter LinkedIn
At Yosemite National Park in California, most accidental deaths are water-related, with people trying to cool off or take pictures, new research shows.
More than 80 percent of the park’s water-related fatalities involve the Merced River and the Mist Trail that runs alongside it, researchers write in the journal Injury Prevention. In many cases, visitors drowned after falling into the river and being swept downstream or over a waterfall.
People tend to think warnings don’t apply to them, the researchers say.
“We see people have a lot of biases in their head that they are somewhat exceptional,” said lead author Deborah Girasek, director of social and behavioral sciences at the Uniformed Services University of the Health Sciences in Bethesda, Maryland.
It's typical of humans, she added, to think something "won’t be dangerous to them, but will be to someone else.”
To learn what motivates park visitors to venture into danger zones, Girasek and colleagues from Yosemite’s Division of Visitor and Resource Protection watched hikers along the Mist trail between June and September 2013.
After hikers went into either of two risky areas – one near the top of a waterfall, the other near a footbridge across the river – the researchers approached them and asked them to take a four-minute survey. Nearly 400, or more than two-thirds, agreed.
More males than females ventured near the most dangerous sites and they tended to be younger than 28 years old. The experienced trail hikers were also more likely to decide beforehand they would take the risks, and veteran Mist Trail hikers were more likely to say they felt safe.
“We see in a lot of the risk literature that people who are familiar with something are much less likely to read the directions or warnings . . . with that comes a sense of safety or comfort,” Girasek told Reuters Health.
Reasons hikers gave for going near or into the water included wanting to cool off, to look at the scenic views, rest or take pictures.
Most of the hikers said others should be able to go where they had gone.
“The people who were in these risk zones . . . were not accurate judges of how safe it was,” Girasek said.
The survey responses "remind us that fresh water is appealing to outdoor enthusiasts on many levels. Safe cooling alternatives, such as misters, might be explored to see if they can compete with a river’s lure," the researchers wrote.
And, they learned, "younger people (who are at greater risk of a water-related fatality) were more inclined than older hikers to enter a risk zone to have their picture taken or climb on rocks. Recreational settings might want to test the appeal of climbing or ‘selfie’ locations that are set up at a safe distance from water hazards."
Jonathan Howland, who directs the Injury Prevention Center at Boston University Medical Center, said the study would be helpful to public health and park administrators, noting recent hiker deaths during flash flooding at Zion National Park in Utah.
“Warnings about risks are mandated with many consumer products, including toys, pharmaceuticals, power tools, cleaning products, ladders . . . .” said Howland, who wasn’t involved in the study, by email. “This approach should be extended to parks and other recreational areas administered by public agencies.
Tags
California Merced River selfie Selfie zones Yosemite National Park in California

A disastrous megaflood is coming to California, experts say, and it could be the most expensive natural disaster in history 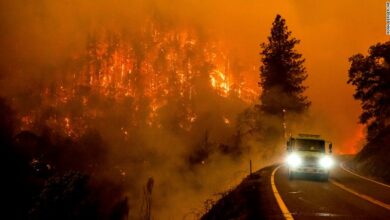 Disaster upon disaster: Wildfires are contaminating the West’s depleting water with ashy sludge