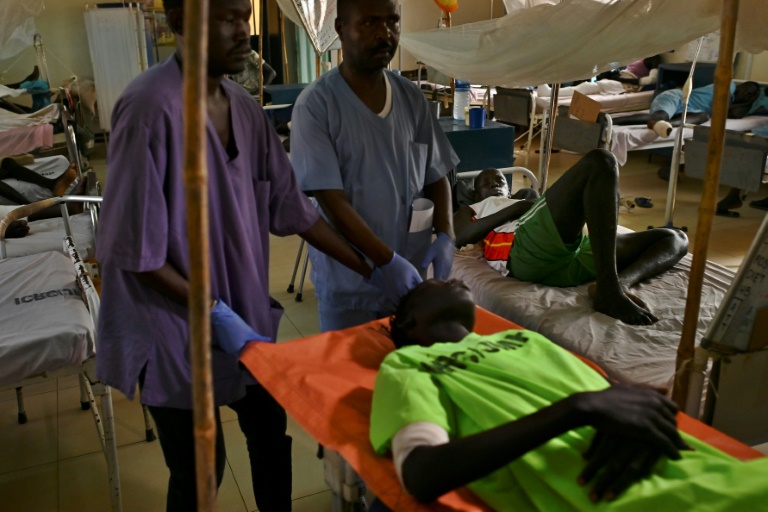 The cattle rustlers were asleep, resting ahead of a raid, when automatic gunfire tore through their camp. Ambushed by rival herdsmen, encircled and outgunned, they were cut down, one by one.

Koba Ngacho was lucky. Shot three times and left for dead, the young rustler was found alive in the carnage, the bullets having missed his vital organs, and airlifted to Juba for surgery.

“I’m grateful to be alive,” the 20-year-old told AFP as he was wheeled to one of the few operating theatres in South Sudan equipped to deal with complicated gunshot injuries.

In February, after months of protracted negotiations, President Salva Kiir and his rival Riek Machar joined forces in government, drawing a line under a long-running conflict that left around 380,000 people dead.

South Sudan’s civil war may have been declared over. But armed violence has anything but slowed in the troubled young country awash with guns, and riven by ethnic turmoil.

Hospital wards overflow with young men like Ngacho — not soldiers, but farmers and herdsmen disfigured by machine gun fire in brutal fighting over land, cattle and revenge.

These clashes between communities have surged even as violence between Kiir and Machar’s forces has eased.

Thousands of armed men from the Nuer and Murle communities have been fighting in Jonglei, an eastern state, since February, leaving towns in ashes and untold dead and injured.

UN special envoy to South Sudan, David Shearer, who toured the conflict-ravaged region this month, said bodies were lying in the open and women and children had been abducted by both sides.

“This is unconscionable,” he told reporters in Juba on March 9 after visiting Pibor, where 8,000 civilians — mainly women, children and the elderly — have sought shelter at a UN base.

Large-scale battles between government and rebel forces ebbed considerably in the aftermath of a September 2018 ceasefire between Kiir and Machar, who is once again vice-president in a unity government with his old rival.

But in 2019, the International Committee of the Red Cross actually treated more patients for serious gunshot wounds than the previous year — 769 compared to 658.

The fear is that 2020 could follow the same trajectory.

Since December, UN peacekeepers have been deployed to Jonglei, greater Tonj in the northwest, and Rumbek, in central South Sudan, where ethnic violence has left scores dead and wounded, and thousands more on the run.

Every bed is taken at the ICRC ward at Juba Military Hospital, where Ngacho, a Murle cattle raider from Jonglei, nervously awaits his turn.

“I don’t know if these wounds will heal, or if I’ll walk again,” he says.

Many here endure multiple rounds of surgery to put their bullet-riddled bodies back together.

His Ethiopian surgeon, Dr Belayneh Assefa, assures he’ll recover. Thirteen other patients have arrived in the past two days, all victims of a vicious cattle raid, and he is busy.

“During the dry season, we will have an influx of patients,” Dr Assefa tells AFP, as a team of surgeons operate on a 26-year-old man with gaping gunshot wounds.

“He is lucky to have survived this.”

Especially so in South Sudan, where healthcare is non-existent in remote parts, and there are about 180 doctors for a population of 12 million.

Only the lucky few gunned down in remote bush conflicts get medevaced to Juba. The rest take their chances at local clinics or simply bleed out in the field.

“Natural triage has often worked, rather sadly, before patients can get to definitive care. Patients who would be described as red—- needing immediate surgery — may well have already perished,” said Dr Colin Berry, an ICRC anaesthetist.

Left unchecked, these local conflicts risk spiralling further out of control, prolonging misery in a country that has known little but war since its independence from Sudan in 2011.

The EU, among others, has urged Kiir and Machar’s government to “redouble efforts” to calm tensions.

But the pair have been busy haggling over key positions in their administration. A new cabinet was announced late Thursday, but the seats of state governors remain unfilled.

“The absence of authority at the state level has caused a vacuum of power and decision-making… emboldening those involved in the recent violent intercommunal clashes,” Shearer said.

A new army of their combined forces, meanwhile, is not ready to deploy and restore security to areas where lawlessness has allowed violence to flourish.

The fighting in Jonglei followed bad floods in the region in late 2019 which wiped out livestock, and left cattle-rearing communities desperately short on assets.

Herders like Ngacho resorted to cattle raiding — a generations-old phenomenon in South Sudan, but one that has turned increasingly deadly.

Spears and other traditional weapons have been replaced by easily-available automatic rifles, a poisonous legacy from decades of war.

Margaret Malweyi, the Kenyan head nurse at the ICRC ward, said patients from rival clans flown to Juba were sometimes placed in separate wards so “they don’t again start fighting”.

Others, once recuperated, would “go back home and want revenge”, she said.

“They get shot again, then they come back here (and) we treat them,” Malweyi told AFP, surrounded by young men in wheelchairs and stretchers, nursing grisly wounds.

Those who pull through confront an uncertain future. Some have lost limbs, or will never walk again.

For others, the trauma leaves indelible scars.

“I don’t want to go back,” said Peter Majok, a softly-spoken 22-year-old, propped up in a wheelchair after being shot by cattle raiders.

Sudan to hand over al-Bashir for genocide trial: official