Bite marks on fossilized bones of dinosaurs like horned Triceratops that lived alongside Tyrannosaurus 66 million years ago indicate T. rex was a bone-cruncher 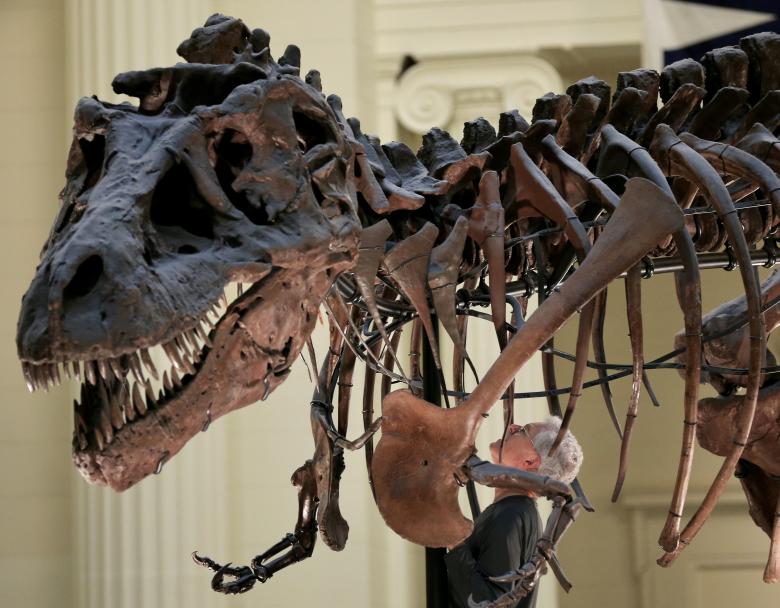 Scientists have come up with one more reason to be amazed by Tyrannosaurus rex. When the huge carnivorous dinosaur took a bite, it did so with an awe-inspiring force equal to the weight of three small cars, enabling it to crunch bones with ease.

Researchers on Wednesday said a computer model based on the T. rex jaw muscle anatomy and analyses of living relatives like crocodilians and birds showed its bite force measured about 8,000 pounds (3,630 kg), the strongest of any dinosaur ever estimated.

“T. rex could pretty much bite through whatever it wanted, as long as it was made of flesh and bone,” said Florida State University paleobiologist Gregory Erickson.

In quantifying the power of T. rex’s chomp, they also calculated how it transmitted its bite force through its conical, seven-inch (18-cm) teeth, finding it generated 431,000 pounds per square inch (30,300 kg per square cm) of tooth pressure, another measure of its power, on the contact area of the teeth.

Bite marks on fossilized bones of dinosaurs like the horned Triceratops that lived alongside Tyrannosaurus some 66 million years ago in western North America indicated T. rex was a bone-cruncher. The ability to pulverize and eat bones gave T. rex, which was about 43 feet (13 meters) long and weighed about seven tons, an advantage over competing predators that could not.

“Predators with bone-crunching abilities are able to exploit a high-risk, high-reward resource: the minerals that make up bone itself and the fatty marrow that is contained inside,” said paleontologist Paul Gignac of the Oklahoma State University Center for Health Sciences, lead author of the study published in the journal Scientific Reports.

In the file photo, Bill Simpson looks inside a fossil of a Tyrannosaurus rex known as ”Sue”, before removing its forelimb to be used for research at the Field Museum in Chicago, Illinois, U.S. “The risk is the potential to accrue extreme tooth damage from biting into bone, making it difficult or impossible to capture prey effectively or rupture the long bones of carcasses, explained Gignac.

Previous studies have estimated Tyrannosaurus bite strength but the researchers in the new study called their approach more sophisticated.

Their computer modeling was developed and tested on alligators, with the researchers studying how each muscle contributed to the bite force.

They concluded T. rex possessed the greatest tooth pressure of any creature ever studied. Its bite force far exceeded that of any living creature, but was not the greatest ever. For example, they estimated in 2012 an enormous croc called Deinosuchus, which lived a few million years before T. rex and weighed even more, had a bite strength of 23,000 pounds (10,400 kg).

Reporting by Will Dunham; Editing by Sandra Maler; Reuters

Dive into nature at Wadi al-Weshwashy