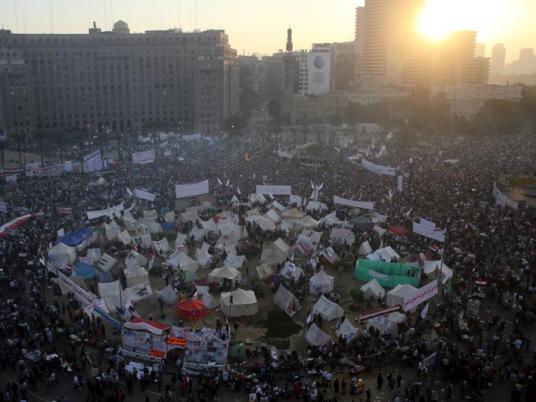 Privately owned media this morning focused on the government calls for reconciliation with the men of the old regime, which is largely seen as a mechanism to boost the regressing economy. Al-Shorouk’s headline reads, “[Prime Minister Hesham] Qandil’s ministers compete over the call to reconcile with the men of the [formerly ruling] National Democratic Party.” The paper quotes new Minister of Legal and Parliamentary Affairs Amr Salem as saying that he doesn’t agree with the political isolation stipulations in the constitution and that he hopes the next House of Representatives will resolve these articles. The paper also quotes the head of the Muslim Brotherhood’s Freedom and Justice Party in Beheira Ossama Suleiman as saying that unless there is a criminal case against a figure from the old regime, reconciliation is possible. Finally, the paper reminds of Minister of Justice Ahmad Mekky’s statements, when he also said that reconciliation with people from the old regime is possible except from the ones implicated in the killing of protesters during the revolution.

On the same page, a story leads with the return of LE1 billion in stolen funds from former regime men after reconciliation deals with ex-officials tried in cases of corruption and money squandering. The story cites the attorney of Public Funds Prosecution Mostafa Husseiny as he says that several former regime figures and ministers had made requests for reconciliation in exchange for the return of stolen funds, including former Minister of Trade and Industry Rashid Mohamed Rashid, former Minister of Finance Youssef Boutros Ghali as well as Hussein Salem, businessman and former President Hosni Mubarak associate. Husseiny dismissed claims that the reconciliation deal is engineered by Muslim Brotherhood leader Khairat al-Shater and added that it is a mechanism to improve the economic conditions of the country.

Al-Watan, meanwhile, leads with a more fiery headline that reads, “the government reconciles with the men of Mubarak while it is in dispute with the opposition.” The Watan story adds quotes from Prosecutor General and President Mohamed Morsy appointee Talaat Abdallah as he explained that the reconciliations are occurring according to the law, whereby defendants accused in corruption cases will have to return stolen funds in order for charges to be dropped.

The Freedom and Justice daily, the Brotherhood’s mouthpiece, ignores the matter and only refers to it in a review of a piece ran by the Wall Street Journal about the reconciliation with Mubarak’s men, adding that Morsy had previously stated that he has not plans to settle disputes with figures from the toppled regime.

The daily also picks its anti-opposition coverage. On its page 2, where it usually presents reviews of content appearing on social media sites, a headline reads, “Activists: the opposition is in love with protests and doesn’t offer solutions.” The story runs a series of Tweets by a select group of users, all bashing the opposition for being passive, reactionary, selfish, unpatriotic and unethical.

Further on the coverage of the current fiscal impasse, the privately-owned Al-Sabah  runs a headline that reads, “Although Morsy promised not to feed the people from ‘haram’ money, [the government collects] LE453 million from alcohol and gambling taxation.” The story details reports from the Tax Authority explaining revenues of taxes from hotels, clubs and alcoholic sales throughout the past year, adding that this income entered the state treasury during the rule of the Brothers who slammed the activities behind it as blasphemous. The story quotes Youssef al-Badry, member of the Supreme Council for Islamic Affairs, as saying that gambling and alcohol money entering the state treasury is acceptable since the prophet and his companions collected similar taxation from non-Muslims.

Less partisan compared to the two extremes of the Freedom and Justice daily and some opposition papers, the state-run Al-Ahram, meanwhile, casts much hope in Morsy’s planned visit to Saudi Arabia tomorrow. “An economic roadmap in the Riyadh summit tomorrow,” reads its headline. The long piece expounds on the stream of possibilities that will open up through this summit, from an Arab free trade zone to a joint Arab market. It dubs it the most important economic event in the Arab world following the Arab spring.

Elsewhere in today’s newspapers, the polarization continues. Al-Sabah runs a full page “investigation” about new rules of enrollment within the Brotherhood that include absolute support to Morsy as the model Brother, the memorization by ear of the supreme guide’s statements and the prohibition against growing beards in order to be able to monitor the opposition closely. Al-Wafd runs a full page review of the sensationally titled book “the Secret of the Temple” by Brotherhood defecting leader Tharwat al-Khirbawy, dubbing it an eye opener for the most concealed facts about today’s ruling and once banned group. The review highlights the Brotherhood’s grooming as a vocal opposition force since the 1990s, with American and particularly CIA support.