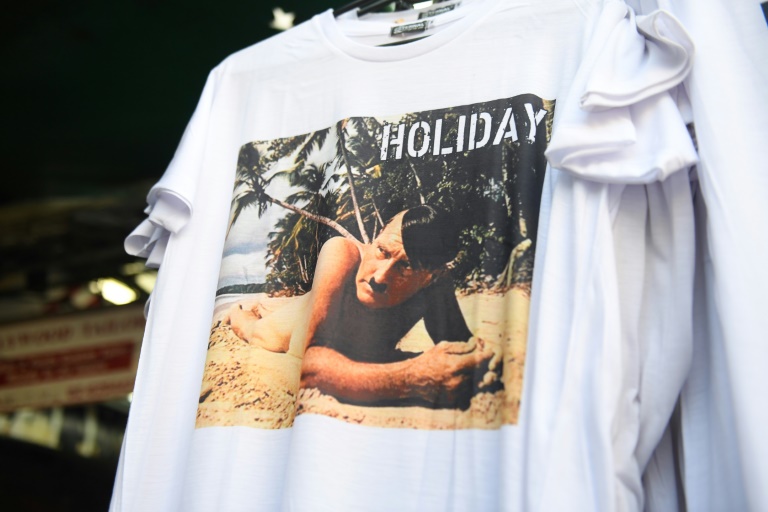 Thai teen idol Namsai feared being booted from her band after a photo of her wearing a t-shirt with a Nazi swastika went viral, but without the uproar she says she would have remained ignorant about the offensive implications of her fashion choices.

As Europe battles a surge in anti-Semitism, including the desecration of graves in France, Southeast Asia is wrestling with a lack of understanding about the provenance of Nazi paraphernalia that casually creeps into public spaces.

From swastika-adorned trinkets on sale at Thai markets to selfies with Hitler statues in Indonesia, Nazi symbols are easy to find — a problem critics attribute to ignorance and a misplaced fascination with the fascist regime.

“I was shocked,” the contrite singer said of the outcry. “But I felt it was my fault. I wasn’t aware even though I should have known.”

The 19-year-old is a member of BNK48, one of the most popular girl bands in the country, performing choreographed J-pop-style numbers to adoring crowds.

But Namsai, whose real name is Pitchayapa Natha, waded into controversy when she wore a red-and-black top showing a Nazi flag and swastika during a televised rehearsal last month, prompting the Israeli embassy to express “shock and dismay”.

Namsai, who has more than 370,000 followers on Instagram, swiftly posted an apology for what she called “my mistake”, met with Israeli diplomats, and offered a tearful onstage apology.

Now she says she may join them in conducting seminars on Holocaust education in Thai schools.

In the meantime, she is researching Nazi history on her own.

“It was a bad experience,” she said. But it also presented an “opportunity” to learn, she added, citing a visit to the Holocaust memorial at the UN in Bangkok also attended by other band members.

While Hitler’s forces carried out atrocities in Europe, his Japanese allies led a scorched-earth campaign across Asia during World War II.

As a result, Japanese wartime actions are the more immediate prism through which many view the region’s history.

The Holocaust is covered in high school textbooks in Thailand but it’s “a small portion” of the world history sections, said Chalermchai Phanlert, an academic at the Education Ministry.

That means less emphasis on Nazis and their impact on Europe.

Derived from Sanskrit and with roots in India, the swastika is a commonly displayed motif in Hindu temples across Asia.

But Chalermchai said younger Thais do not fully understand the swastika’s European context or Nazi history in general. Instead, Third Reich symbols are used to sell fashion and anti-establishment culture.

In September a love motel outside Bangkok sparked outcry after photos online showed a portrait of Hitler hanging in one of its themed rooms.

Red-and-white swastika badges, stamps, flags and other Nazi-themed trinkets are on sale at Bangkok’s popular Chatuchak weekend market, while a vendor on tourist hub Khaosan Road hawks t-shirts of a naked Hitler enjoying a beach holiday.

Enthusiasm for Nazi iconography and portrayals of Hitler have earned rebukes in other Southeast Asian countries.

In 2017 an Indonesian museum that allowed visitors to take selfies with a wax sculpture of Hitler removed the exhibit following global condemnation.

But awareness of the offence caused is growing.

In Myanmar’s biggest city Yangon shopkeeper Ko Ko Aung said he used to be part of the punk scene where clothes with swastikas were part of a spirit of rebellion.

Now he says he understands that “punk and Hitler are not connected”.

It is both “inaccurate and unhelpful” to draw a link between a vogue for Nazi chic and anti-Semitism, says Elliot Brennan of the Institute for Security and Development Policy in Stockholm.

“That is not to say that anti-Semitism does not exist in Asia but one could argue these are led more by anti-Israel positions than anti-Semitism,” he said.

Thai history lecturer Tul Israngura Na Ayudhya said the fascination with Hitler has to be seen in context, adding that a lack of education is only part of the story.

Many countries in Asia have a complex relationship with strongmen generals and leaders who are sometimes wrongly applauded as nationalist modernisers.

He cited Mao Zedong, a figure whose policies cost countless lives but who has been the subject of nostalgia in some quarters of late.

And so Hitler is not necessarily “associated with the devil” by everyone in the region.

Tul teaches one of the few university courses devoted to Nazi Germany in Thailand at Chulalongkorn University, where his syllabus begins with Holocaust survivor Elie Wiesel’s memoir “Night”.

One of his students, German major Thanapon Danpakdee, laments the carefree approach to Nazi symbols in Thailand, even when it is not meant to offend.

“I think they ignore the other side,” he said.

Five 'Hitler' paintings to go under hammer in Nuremberg