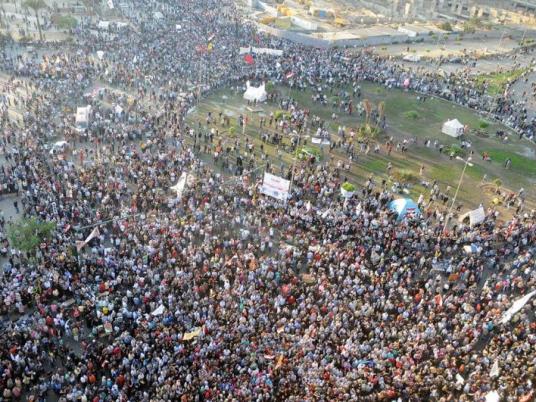 As the sun set on Friday, Yassin el-Omrany climbs to hang the Egyptian flag on a pole at least 10 meters high, which stands in the garden at the heart of Tahrir Square filled by thousands as clashes raged on in the surrounding streets.

Protesting against President Mohamed Morsy’s constitutional declaration announced late Thursday, Omrany echoes the sentiment of many: “This flag is the smallest expression we can use as citizens deceived by the president’s promises.”

“Before his election, he promised to be a president for all Egyptians, but what happened [Thursday] night makes it clear that he works only for the permanence of the Muslim Brotherhood in power for as long as possible,” he adds.

After a while, the flag flutters and he goes on to say confidently, “The people will not allow a new dictator to exist and this constitutional declaration must be retracted.”

In the complete absence of Islamist forces, Tahrir Square was the sight of protests of a scale rarely seen since demonstrations against the military council, which came into power after Hosni Mubarak’s ouster and until shortly after Morsy’s election.

Meanwhile, Morsy supporters were stationed around the Presidential Palace, where the president eventually came out to give a speech.

Participating in what was dubbed the “Friday of Anger and Warning” in Tahrir were secular forces, civil society activists, liberal and leftist political parties including Al-Dostour, the Free Egyptians, Al-Wafd, the Popular Current and the Socialist Popular Alliance. They marched from around Cairo to the iconic square, along with groups including the April 6 Youth Movement, Revolutionary Socialists and the Kefaya movement.

Most participating parties announced late Friday an open sit-in as political forces put together a unified set of demands, chief among which is the cancellation of the constitutional declaration and dissolving the Constituent Assembly tasked with drafting the new constitution.

The unprecedented declaration with which Morsy cemented far-reaching powers renders the president's decrees and laws immune from appeal or cancellation. It also protects both the Shura Council and the Islamist-dominated Constituent Assembly from dissolution by any judicial authority, extending the mandate of the latter by two months and essentially voiding court cases against it.

The second declaration of his reign, and the sixth since the 1971 constitution was suspended, also gives immunity to all decisions and decrees issued by Morsy, who went further to sack the prosecutor general and grant himself the exclusive right to take any measures he sees fit to protect the country's national unity, national security and the revolution.

The fury of protesters was palpable and the phrase “political thuggery” was a common response to comments about Morsy’s decisions.

This amid a frenzy of skepticism and denunciations by legal and political experts vis-à-vis the legality of the declaration as well as reservations regarding the president’s unfettered use of legislative powers while disregarding other national and political forces.

Mohamed Karim, a 25-year-old protester, says, “Egyptian churches officially withdrew from the Constituent Assembly in protests of the behavior of Islamist forces, which dominate the assembly and only want to do what’s in their interest.”

The bumpy constitution-writing process was hit with a wave of walkouts last week from church representatives, secular members, journalists, youth activists, and even the assembly’s speaker.

All of them say they’ve reached a dead end after repeated failed attempts at compromising with the majority Islamist members.

“The president ignored all of that, overlooking the withdrawal of representatives of 10 percent of Egypt’s population, and instead protects the assembly — sorry, but this is nonsense from a president exercising thuggery over the people with his authorities,” Karim adds.

Describing Morsy as “a new pharaoh with a beard,” an image drawn by numerous critics since the announcement of the declaration, Karim says “the president is cementing the presence of the Brotherhood in every corner of the state,” manifested in his appointment of a new prosecutor general rumored to have close associations with the group.

One of the main revolutionary demands has been the removal of the Mubarak-era prosecutor general, long viewed with skepticism and accused of being key to the acquittals of former regime figures and police officers involved in the killing of protesters, due to insufficient evidence presented to the criminal courts.

Morsy's previous attempt to sack prosecutor general Abdel Meguid Mahmoud was immediately reversed after it stirred a wave of wrath from the judiciary, which considered the move an infringement on its independence. The prosecutor was conventionally immune from executive intervention.

Mostafa Shawqy, member of the Socialist Popular Alliance’s executive office, says while calls to remove the prosecutor general were based on revolutionary demands, it must occur through policies that reform the judicial system, and not an “authoritarian presidential decree.”

On his part, Karim views the removal of the prosecutor general as politicized since “he is not a friend of the Brothers,” adding that the decision is disguised in revolutionary legitimacy but is actually in the interest of “Morsy’s regime.”

Commenting on the second article of the declaration which ensures the immunity of presidential decrees and laws from appeal or cancellation, former socialist presidential candidate Khaled Ali says the decisions are a deathblow to the State Council.

“The mandate of the State Council is to arbitrate in disputes or legislation that harm citizens,” Ali explains.

“The immunization of decisions means prohibiting different streams of the population form opposing the president or the government, and this is the first time this happens in more than 60 years.”

Away from conversations around the square picking apart the constitutional declaration, clashes escalated between Central Security Forces and protesters in the surrounding streets of Mohamed Mahmoud and Qasr el-Ainy, with a heavy onslaught of tear gas that at times wafted into the square.

On the fifth day, the clashes left more than 20 injured and continued well into the early hours of Saturday.

Ironically, the declaration they are protesting creates a Revolution Protection Law that is supposed to translate into retrials for former regime officials and police officers found not guilty of killing protesters.

But on the now scattered front lines, protesters are still facing down heavy-handed security and rejecting the use of force against demonstrators, in clashes that began on the first anniversary commemorating last year’s Mohamed Mahmoud clashes which left more than 45 killed.

One protester in Qasr el-Ainy who preferred to remain anonymous says, “Will the president begin retrials without working on reforming the primary source in the struggle, which is the Interior Ministry? Simply, it’s as if he’s doing nothing.”

Legal experts have said the retrials are not viable without the existence of new evidence, which is a far-fetched possibility given that much of the evidence is said to have been destroyed by its gatekeepers, the same parties accused of being responsible for the killing of protesters.

“Our battle with CSF is enough evidence that the government still uses the police as a tool to crush the opposition,” he asked.