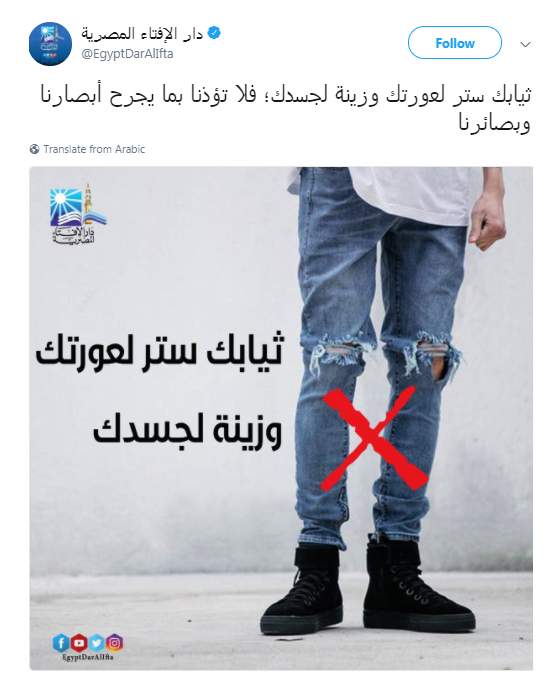 One of Egypt’s leading Islamic educational institutes and government bodies, Dar al-Ifta al-Miṣriyyah, which was founded to represent Islam and serve as a center for Islamic research, called on young Egyptian men to avoid wearing torn trousers, as it considered this a violation of Islamic teachings.

“Your clothes are a cover for your genitals,” it wrote in a Facebook post, with an accompanying photo of a man wearing torn jeans. “These clothes are also considered a decoration,” the post read, and described the clothing as “inappropriate appearance.”

Monufia University stirred stirred controversy in September when one of its faculty deans said that a ban will be imposed on “ripped or faded pants from campus.”

Alexandria University followed suit, with the dean of the Faculty of Agriculture issuing a statement going further, saying that not only would ripped jeans be banned, but also tight clothes and galabiyas (a traditional Egyptian item of clothing).

“This type of attire is inappropriate and goes against our values, traditions and religion,” said the dean.

“I immediately ordered our head security officer to meet with the girls and inform them that their attire isn’t allowed on campus. I also issued directives allowing security guards to ban any student wearing such clothes from entering campus,” the dean ranted on.

Moreover, Alexandria University’s Department of Commerce was reported to have implemented the same ban, and inflicted a LE 50 fine for anyone wearing prohibited clothing on campus.

The department also prohibited curse words to be used on its Facebook page.

Al-Azhar accredits 50 clerics to give official fatwas on TV