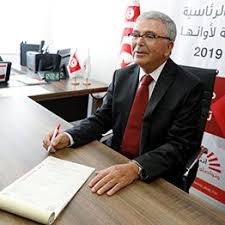 TUNIS (Reuters) – Tunisian Defence Minister Abdelkarim Zbidi submitted his candidacy for a presidential election on Sept. 15 as an independent on Wednesday and said he would resign from government.

Zbidi, 69, who has the support of secular parties including Nidaa Tounes and Afek Tounes, is likely to emerge as one of the frontrunners in the election, which was called early after the death of president Beji Caid Essebsi last month.

Zbidi, a technocrat and medical doctor by training, is considered by many to be above the party politics and infighting that has held back badly-needed economic reforms in Tunisia in recent years.

He looks set to be the most serious rival to Prime Minister Youssef Chahed, who will run as a candidate for the liberal Tahya Tounes Party.

On Tuesday, Tunisia’s biggest political party Ennahda nominated its vice president Abdel Fattah Mourou as a candidate. He is the first presidential nominee from the moderate Islamist party since Tunisia transitioned to democracy after the 2011 uprising that toppled veteran autocrat Zine al-Abidine Ben Ali.

Other candidates include liberal former prime minister Mehdi Jomaa and Moncef Marzouki, who served as interim president for three years after 2011.

Tunisia was where the Arab Spring protests that swept the Middle East and North Africa in 2011 began, and the only country where the uprising was followed by a peaceful transition to democracy. Nevertheless it remains mired in a severe economic crisis that has fueled social discontent.

Tunisia’s president controls foreign and defense policy, governing alongside a prime minister chosen by parliament who has authority over domestic affairs.