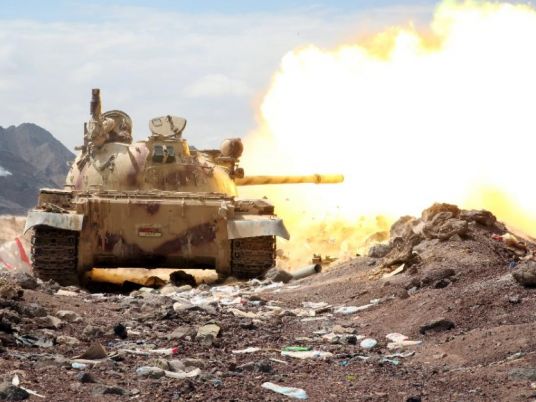 A key member of a Saudi-led Arab coalition has blamed Islamists for delays in its military operations to expel Shi'ite Houthi rebels from the key southwestern province of Taez.
The coalition on Monday intensified air strikes against the Iran-backed rebels in Taez as an Emirati minister blamed an influential Sunni Islamist party's for the delays.
Coalition jets carried out several strikes against rebel positions on the outskirts of Rahida, the province's second-largest city, military sources said.
On the ground, loyalist troops and allied Popular Resistance fighters fired Katyusha rockets and mortar rounds at rebel positions, said Fadhl Hasan, commander of the operations to retake Rahida.
Breaking the siege of the government-held provincial capital of the same name is seen as crucial for the recapture of other central provinces and for opening the way to the rebel-controlled capital Sanaa.
Pro-government forces have retaken "19 military positions" from the rebels in areas surrounding Rahida since the offensive began a week ago, Hasan said.
Military officials have said landmines were hampering the progress of government forces and had caused casualties.
Hasan said one of his troops was killed when a landmine exploded on Monday.
The advance has also been slowed down by the "betrayal of some Popular Resistance fighters", another military source said.
Emirati State Minister for Foreign Affairs Anwar Gargash tweeted Sunday that "had it not been for the failure of Al-Islah and the Muslim Brotherhood to act," Taez would already have been "liberated".
The Islamist party Al-Islah is a main component of the Popular Resistance which also groups tribesmen, soldiers and southern separatists.
The party, highly influential in Taez, is linked to the Muslim Brotherhood, which the UAE has banned as a "terror" group.
The United Nations says more than 5,700 people have been killed since the Saudi-led intervention in support of the Yemeni government was launched in March, nearly half of them civilians.