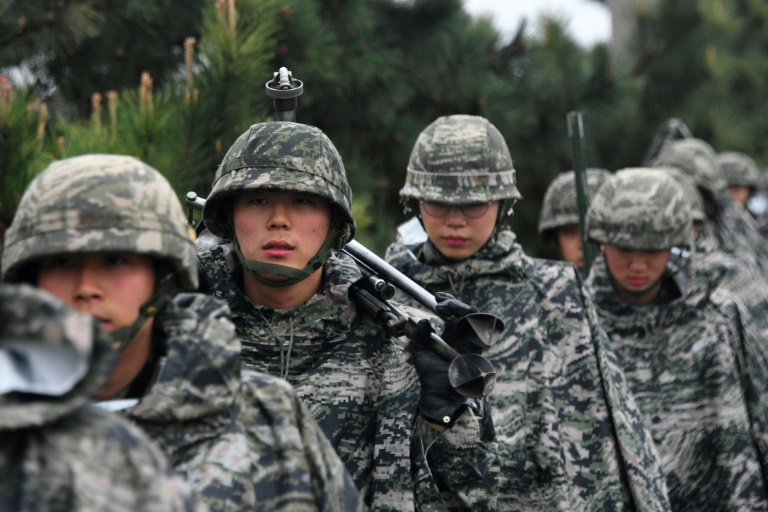 The US and South Korea announced Sunday an end to key annual large-scale military exercises in support of diplomatic efforts to persuade North Korea to abandon its nuclear weapons programme.

The decision comes days after the conclusion of US President Donald Trump’s second summit with North Korean leader Kim Jong Un in Hanoi, which ended without a formal agreement but with both sides suggesting they would keep talking.

There are close to 30,000 US troops stationed in South Korea, and their annual drills with tens of thousands of South Korean soldiers have been a perennial target of North Korean fury — with Pyongyang condemning the manoeuvres as provocative rehearsals for invasion.

While Trump has ruled out withdrawing the troops, he has repeatedly complained about the cost of the exercises, describing them at a press conference in Hanoi as “very, very expensive”.

During a Saturday phone call between South Korean Defence Minister Jeong Kyeong-doo and his US counterpart Patrick Shanahan, “both sides decided to conclude the Key Resolve and Foal Eagle series of exercises”, according to a Pentagon statement.

Foal Eagle is the biggest of the regular joint exercises held by the allies.

It is accompanied by Key Resolve, a computer-simulated war game conducted by military commanders which usually begins in March and runs for about 10 days.

Washington and Seoul will instead conduct “modified” drills starting Monday through to March 12, a joint military statement announced Sunday.

The nine-day exercise, officially named “Dong Maeng” or “Alliance”, will largely focus on joint defense manoeuvres rather than the offensive posture of the Key Resolve drill, a South Korean military official who requested anonymity told AFP.

There was no indication of how many US and South Korean troops will be mobilised for the new exercise.

Lee and Biegun are expected to discuss the Hanoi summit, which failed to build on the vaguely-worded commitment to denuclearize the Korean peninsula signed by Kim and Trump during their meeting in Singapore last year.

Opponents of scrapping the drills have warned that it could impact the combat readiness of the combined US and South Korean forces and hand the North a strategic advantage on the divided peninsula, but most analysts said such concerns were exaggerated.

“Suspending or downgrading the US-South Korean drills may hurt the readiness of the two militaries, but I don’t think it’s going to be a serious security threat to South Korea,” Ahn Chan-il, the president of the World Institute for North Korea Studies in Seoul, told AFP.

“The South’s conventional forces outclass the North’s, and given the current situation (with the US and the existing sanctions), it’s highly unlikely that Pyongyang will do anything with its nuclear weapons in the foreseeable future,” he added.

Retired General Vincent Brooks, a former commander of US forces in South Korea who helped organize Trump’s first meeting with Kim in Singapore, said last year that any end to joint training would not hinder the Pentagon’s combat-readiness on the peninsula.

“Perhaps we’ve been told for now to put our sword back into its sheath, but we have not been told to forget how to use it,” he said.

Washington has sought to end long-running tensions on the peninsula and encourage North Korea to scrap its nuclear programme.

Since the Singapore summit, the US and Seoul have scaled back or scrapped several joint military drills, and US bombers are no longer flying over South Korea.

“Not downgrading or suspending the drills at this point … would mean the involved countries are not serious” about reaching a denuclearization accord, said University of North Korean Studies professor Yang Moo-jin.