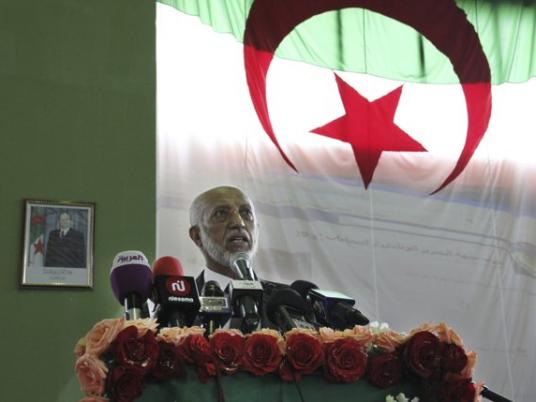 ALGIERS, Algeria — In the gritty, working-class Algiers suburb of Harrache, activists sporting the green baseball caps of the Islamist "Green" alliance hand out election leaflets outside their party headquarters, urging people to vote.

A middle-aged man pushed past the young activists.

"The last people I voted for were thrown into jail," he said in disgust. "I'm done with that."

Algeria is gearing up for parliamentary elections on Thursday that promise to be the freest ever. But the legacy of the 1991 elections nearly won by Islamists before a military coup ended the voting hangs heavy: Memories still fester of how Islamist candidates were thrown into prison and the nation plunged into more than a decade of civil war.

Once again, Islamists will square off against pro-government parties. But after decades of repression and rigged contests, turnout may not surpass the anemic 35 percent seen in the last elections in 2007.

The Arab Spring pro-democracy uprisings that engulfed the region have largely bypassed Algeria, the African continent's largest country and an OPEC member rich from its natural gas fields. But while the nation's wealth has helped stave off unrest, faith in the political process appears broken.

"All the parties are the same, filled with scammers and the corrupt," said Hamid Bouchna, an unemployed university graduate with a degree in electrical engineering.

President Abdelaziz Bouteflika is promising reforms and free elections with international observers to placate a restive population. But the three weeks of election campaigning that ended Sunday were characterized by low turnouts at rallies, defaced election posters and a populace that seems immune to government promises that this time will be different.

"Elections in Algeria do not have a good reputation. People say I vote, but nothing changes — it's the same people we always see, the same parties," said sociologist Nasser Djabi, noting that the legislature is largely powerless in the face of an autocratic president.

On Thursday, 21.6 million Algerians will vote for 44 parties, half of which were just legalized this year, for a parliament that Bouteflika promises will have a say in rewriting the constitution.

Yet the elections are expected to produce a fractured legislature divided between government parties, the Islamist alliance and a smattering of smaller groups.

During the campaign, most Algerians showed more enthusiasm for the final matches of the Algeria league soccer club championships and even the presidential election in France, Algeria's former colonial master.

As the campaign ground on, newspapers were filled with news of sporadic Al-Qaeda attacks and small protests around the country over lack of jobs and housing. Unrest erupted then subsided after a man fatally set himself on fire in April in the eastern city of Jijel after police cleared away his illegal cigarette stall, an act that echoed the self-immolation of a vendor in Tunisia that set off the Arab Spring.

Algerian authorities are hoping to present an image of reform and change to the world, allowing in 500 foreign observers.

"There was the Arab Spring, so the government decided to have free elections and I think this is for external consumption," said Nour-Eddine Benissad, the president of Algeria's League for the Defense of Human Rights. "I don't think there is a real will to remake the political scene."

But the opposition Socialist Forces Front, one of the few credible non-Islamist opposition groups, sees the international presence as a big step forward for Algerian democracy.

"The Western democracies will no longer allow the falsification of the will of a people, so there is a glimmer of hope that these elections will not be rigged," said Mustefa Bouchachi, a human rights lawyer heading the party's list in Algiers.

During the campaign, the state media for the first time gave something resembling equal time to opposition parties.

For his part, US Ambassador Henry Ensher told The Associated Press that there was "a very strong commitment to having free and fair elections," noting the presence of the local and international observers.

In their campaign speeches, the leaders of the two pro-government parties have tried to dismiss the Arab Spring as a sower of turmoil.

"The Arab Spring for me is a disaster, we don't need lessons from outside, our spring is Algerian, our revolution of 1 November 1954," said Prime Minister Ahmed Ouyahia at a rally Saturday of his National Democratic Rally.

Like other government politicians during the campaign, he clung to familiar themes, citing the start of the bloody independence struggle against France that ended in 1962 — rhetoric that has little resonance with the 70 percent of the population that is under the age of 30 and afflicted by a 20 percent unemployment rate.

The last group to truly mobilize the country toward change was the Islamists of the Islamic Salvation Front. They nearly won the 1991 elections and have since been banned from politics.

Surfing on a region-wide wave of Islamist victories, Algeria's new generation of Islamist parties is hoping to recapture some of that popularity — but the message this time is more economic than religious.

Amar Ghoul, the lead candidate in Algiers for the Islamist Green Alliance, spent much of the campaign courting poor people in neighborhoods like Harrache.

"These elections are not just about the parliament," he said after meeting with an elderly woman whose house was falling down around her. "It is for a new government, representative and effective."