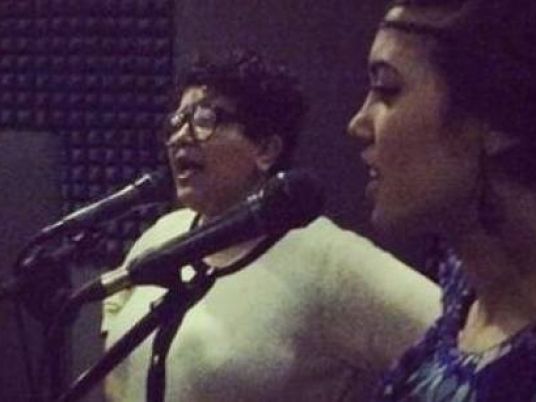 Egyptian women have the right to ride bicycles and wear dresses in Egypt’s streets. They have the right to work, travel and change society’s stereotype of what women are allowed to do, female underground music artists say, defying both mainstream music and Egyptian society’s perceptions of women.

Through rock, metal, rap and jazz, they get their message across.

The phenomenon of underground music came to the fore in Egypt in recent years, giving women artists a space to express themselves and speak for other women.

The first “taboo” Rania al-Adawi faced when she was forming her band in 2015 was to find female musicians who can join in. “Families were worried about their girls becoming members of underground bands. Although girls can make good art, they are often not given the opportunity,” she told Aswat Masriya.

Eventually, she had to resort to men to be able to form her band, “Taboo”. But she could still rebel against “masculine dominance” through music. Women are both “pretty” and “brave”, Adawi says in her song “Don’t look at my outside only.”

“From the heart of tyranny, I come to snatch my right. I reject the eastern man’s unjust laws," she says in another song.

“We have many segments [of women in society] that no one speaks for, like indebted and divorced women, girls subjected to harassment in the streets and those who face restrictions imposed by our eastern culture. Such topics need attention,” she said.

Interestingly, many of Taboo’s listeners are young men, even though Adawi primarily targets women through her music.

“I think this might be because a boy needs to understand a girl’s personality and … her world. If this happens, the way he deals with her will be different,” she says.

After attending a writing workshop organised by Nazra for Feminist Studies, a civil society organisation, in June 2014, three women translated what they learnt into music. They formed Bint al-Masarwa (Egyptian girl) to contribute to “a cultural dynamic” and support society’s tolerance of “free choice”, according to Marina Samir, one of the band’s members.

They also want to “create alternative art spaces in marginalised areas in Egypt so as to allow for expressing life experiences and problems that gender-based discrimination contributed to,” according to Esraa Saleh, another member.

They chose the band’s name carefully to reflect the audience that they are trying to reach, "the most marginalised segments in Upper Egypt and the Delta,” Samir said, in reference to provinces located in the south and north of Egypt, away from the capital.

“We work on documenting life experiences and present them in an artistic form as a way to resist the dominant culture, which perpetrates stereotypes of those communities … and reinforces masculinity, patriarchy and other systems of oppression,” she added.

In “Bitter, bitterness”, Bint al-Masrawa artists say that “Love was never about control … You say you want to protect me. In this way you eliminate me.”

Their songs also include “Tell her father”, “My freedom” and “Big war”.

As of yet, their audience is limited mainly to “those who are interested in women’s issues and gender. We hope in the future to reach wider segments of people who differ from us ideologically.”

Taboo’s Awadi is right about saying that it is normal for people to differ about the kind of art they present. “Not all of them will be with you or against you, and this is a healthy thing."

Mahmoud Refaat, the owner of a music production company, believes that what some female underground singers try to do is “the biggest mistake” and results in “reinforcing the problem" instead of "presenting solutions.”

Addressing women’s issues through songs is not the way to overcome society’s taboos, he said. Instead, such underground women artists should change by becoming examples of what women can do. “When women make music just like men, that’s a practical example and it has a bigger impact on young generations — when they see, for example, a girl as a DJ or playing or singing with a band,” Refaat said.

He finds this more effective for women’s cause “than singing about their problems and underlining them” — better than women saying “I am oppressed” in songs.

But Entessar Said, the head of the Cairo Foundation for Development and Law, disagrees with Refaat. She believes that art and music play a major role in changing society’s perceptions, because music reaches the hearts and minds of wider segments of society.