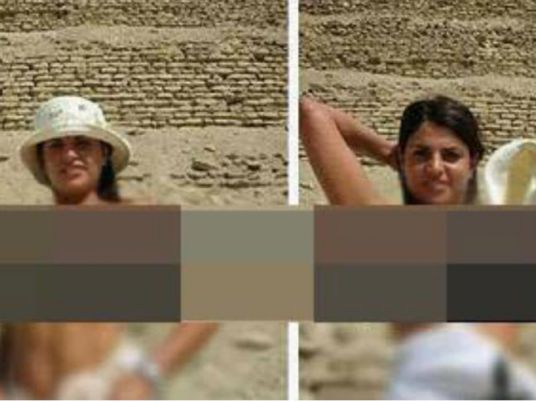 Novelist and writer Gamal al-Ghitany called Thursday on Antiquities Minister Mamdouh al-Damaty to announce the names of officials responsible for the scandal of the porn movie which was shot at the Pyramids and Sphinx area.
Ghitany told Al-Masry Al-Youm the names of employees who allegedly disabled the surveillance cameras must be disclosed.
He described the incident as "a crime against the country that could be exploited politically in the future."
Haram district prosecutors Thursday started investigating a claim filed by a citizen over a pornographic video clip, shot at the Pyramids and Sphinx, that has been uploaded on three porn websites.
The prosecutors received four other photos, beside the video, with sexual content of tourists at Pyramids and Sphinx dating back to 2011, according to investigations.
The backgrounds of the photos showed walls that have been demolished in the past few years due to changes carried out at the archaeological area of the pyramids. It also showed recruits with the Tourism and Antiquities Police who have been in service at the Pyramids area in 2011, according to investigations.
Osama Karar, the coordinator of the Popular Front to Defend Antiquities in Egypt, said Wednesday that the 10-minute movie has been available online for nine months and includes several pornographic scenes filmed at Senn al-Agouz area inside the Pyramid and near the Sphinx. The tour guide and the name of the tour company are clearly visible in the video, Karar said.
The scenes were made by Russian tourists who translated the clip into English later, he added.
Minister Damaty issued a statement Thursday saying the incident has been referred to the prosecution for investigation.
Edited translation from Al-Masry Al-Youm