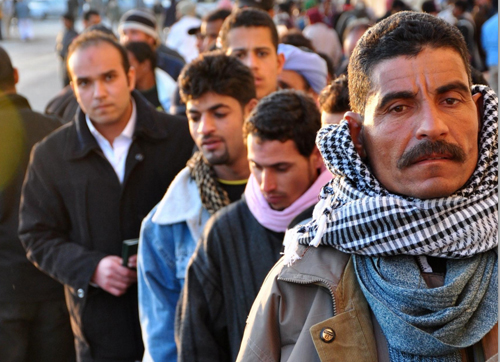 With the dire economic situation, current political instability and increasing sectarian strife becoming part of everyday living and conversation, many Egyptians are toying with the question of whether or not to leave the country, and for how long.

For some, it’s a glass half-full or half-empty question, depending on economic or political status. For many, however, there is no glass at all, since leaving is either practically impossible, even if the desire is there, or out of the question, because of an unshakable patriotism.

But it would be foolish to ignore the fact that, for the second time in Egypt’s history — the first being the mass waves of migration that took place in the 1960s and 1970s, following the 1952 Revolution — a second wave of migration is occuring. For some reason, however, discussing this outside of close circles is considered somewhat taboo.

For this writer, leaving is not out of the question, since I am an Egyptian national, though with two passports. (I also have Australian nationality.) Thus far, every single member of my Egyptian family has left Egypt, either in the late 1960s or last year.

Thus, I am the last member of my family to remain here and almost daily, I wrestle with that decision — in the face especially of increased slurs and attacks because of my foreign appearance.

My situation is not abnormal, however, according to some. “During any big uprising or revolution, questions of migration are completely normal and don’t have as much to do with class or religion as people think,” says Said Sadek, political sociologist at the American University in Cairo.

“For example, my daughter wants to leave, but I choose to stay and fight no matter what, even though I have the means to leave. Similarly, some of my Christian friends chose to leave immediately while others tell me they’re going to stay until they send the [Muslim] Brotherhood to Afghanistan.”

He says the decision to leave involves many factors that boil down to one’s personal relationship to any society undergoing change, as this evolves over time.

“The fact is, the nature of revolutions in themselves involves mass demographic shuffling,” Sadek says.

The first waves of migration post-25 January occured as a result of sectarian threats to Copts, after the burning of several churches and the Maspero massacre of October 2011, when a mostly Coptic march was attacked and more than 20 protesters were killed. These events prompted many Copts to immediately attempt to emigrate to countries like Canada or Australia.

Last year, the Netherlands even offered potential asylum to Copts who were already in the country, meaning many Copts decided to take a holiday there.

But these days, as Sadek says, it is no longer only a sectarian issue. Some are seeking employment and better opportunities, while others fear for their rights. Others still just want a two or three year break to gain experience to return to a better career.

Whatever the reason, those with the biggest dilemmas on whether to leave or stay are often those with young children.

According to a May 2011 study by the International Organization for Migration, the five top reasons for Egyptians wishing to emigrate were jobs and employment, corruption, security, salaries and constitutional reform. Access to education, housing and the transitioning government were also on the list.

Nearly two years later, no newer studies have been carried out, and while these reasons may well have changed now, the will to leave for many may have increased.

Mohamed, a taxi driver, says that since the 25 January revolution, he has been desperately saving money for a visa to the US, where he hopes to stay permanently. Like many others in the same situation, the visa process is very expensive for him and requires a huge amount of personal sacrifice and conviction.

“I have an engineering degree and I am a [bloody] taxi driver,” he says. “I have two children. Even if I can afford to make them doctors — which I can’t — they could end up cleaning the streets. Leaving is a must for anyone with a brain.”

For people like Mohamed, the options are either to obtain a tourist visa for a country and stay there illegally, which is obviously problematic, expensive and has a low chance of success, or apply for visa lotteries, which are also very difficult.

“But as long as I can work and save enough money, I will keep trying,” he says.

Injy, who recently divorced her newly Salafi husband, is a female public school teacher who lives with her daughter. She says she fears for their safety.

“Women’s rights are going down the drain,” she says. “I am harassed every day, and I don’t want my daughter growing up like this, as it is becoming worse and worse.”

“I’m scared that as Sharia integrates into Egyptian law, my husband will be given custody of [my daughter] and can circumcise her if he wants, and I will become just a nobody divorcee,” she explains. “I am planning to leave as soon as I’ve saved up enough money.”

Noura, 31, carries both an American and Egyptian passport, and hence has the means to leave.

She says that although Egypt will always be her base for life, she “would love to leave for just a couple of years, so my kids can spend some of their formative years not around classism and tear gas and constant violence everywhere.

“It can’t be healthy, but again, leaving the place you were born, with a family, is not easy,” she says.

But for many, while the situation may seem bleak, there is little desire to leave unless every single right and freedom is stripped from them.

“As long as I can manage to lead a life that I can attribute some value to, whether it be fighting for the revolution or maintaining a minimal salary so I can eat, I will stay until the end,” says Azmy Salama, a tour guide based in Abu Sir.

The difficulty seems to arise partly because Egyptians are finding it harder and harder to identify the changing values of their country. Questions of emigration during times of revolt become more pertinent as these values — minimal as they may be — are slowly stripped away.

As Sadek says, “You don’t have to kick someone out to make them leave, you simply threaten their hierarchy of needs. Everyone’s is different.”

In that sense, the toughest decisions will not necessarily for the diehard revolutionaries or martyrs, but for those who love their country and, despite wanting better for it, are beginning to feel unwelcome and undervalued.

But the questions that remain include:: Does leaving not make it worse for those who stay? If Copts, minority groups or opposition members leave Egypt because their values and livelihoods are threatened, does it not then make it worse for those who stay behind, as their voice becomes smaller and smaller? And, by extension, would that not be perhaps exactly what dictatorial regimes would want?

Sadek believes that yes, it is completely true — and is in fact part of the nature of autocratic or theocratic regimes.

“Declaring psychological warfare against minorities and vulnerable groups is textbook procedure during times of revolution, especially here, where the outgoing government was an autocratic one and the incoming is a theocratic one, well-trained by the former,” he says.

But, sounding a rare note of optimism, Sadek believes that, if there are no financial or religious imperatives, the right choice is to stay.

“I have read and seen much worse in my life,” he says. “We could’ve been Syria or Libya, but we are not. The Egyptian people are diverse but strong and united in ways that they can feel, but are unable yet to formally establish on paper. The Brotherhood would love to squash this but they will be unable to. I am hopeful, and will stay until defeated.”