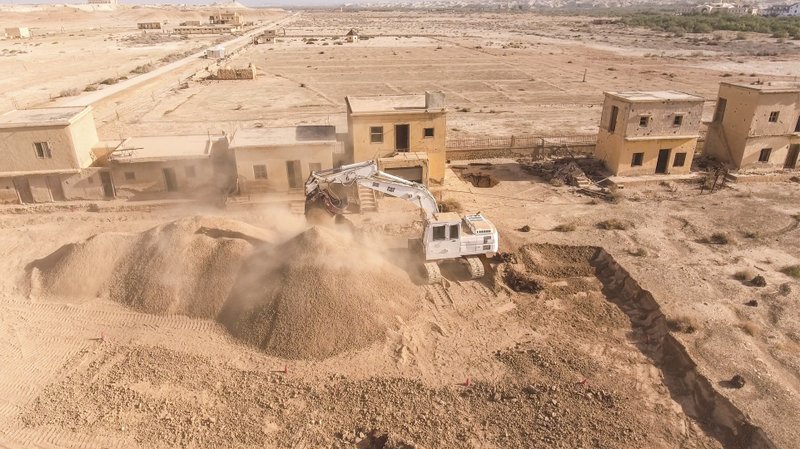 Pilgrims seeking serenity during a visit to Jesus’ traditional baptism site may be rattled to discover they are surrounded by thousands of land mines left over from dormant Mideast conflicts. But a project now underway plans to rid the West Bank site of the explosive devices, clearing away the relics of war that have blemished the sacred place for nearly five decades.

Land mines still speckle many parts of Israeli war-won territory. But the effort at the baptism site carries particular weight because of its importance to the world’s Christians and the delicate international diplomacy that was required to take the project off the ground.

The project’s organizers had to navigate a virtual minefield of often quarreling church denominations, as well as Israeli and Palestinian officials.

“To see a site that is visited by over half a million pilgrims and tourists each year and for them to come in their buses and be so close to land mines is very unusual,” said James Cowan, the head of The HALO Trust, an international mine-clearing charity carrying out the project. “We hope that pilgrims and tourists will be able to visit this site and celebrate the baptism of Christ in the way that was intended.”

Christians believe John the Baptist baptized Jesus at the site, a lush stretch of the Jordan River flanked by desert — Christianity’s third holiest site after the Church of the Holy Sepulcher in Jerusalem, built on the spot where Christian belief says Jesus was crucified and resurrected, and the Nativity Church in Bethlehem, constructed on the site where tradition holds Jesus was born.

The baptism marks the beginning of Jesus’ public ministry. Many modern-day visitors don white robes and immerse themselves in the sacred waters in a show of faith.

Churches were built in the area as early as the 4th century. By the 1930s, Greek, Coptic, Syrian and Catholic churches, among others, all had plots in the river valley, erecting golden-domed shrines and other structures.

Israel captured the West Bank in the 1967 Mideast war. Shortly after that, clergy fled their plots and Israel began planting land mines both on church land and in the surrounding area to fend off enemies. Israeli officials say that among the 3,000 explosive devices in the baptism site’s vicinity are also booby traps laid by Palestinian militants. Unexploded ordnances also litter the area.

A small path was cleared for Pope John Paul II’s visit in 2000 and pilgrims for years had to coordinate their visits with the Israeli military, because of security and land mine concerns.

In 2011, the site was officially opened to the public after Israel cleared a narrow road leading to the Jordan River. Today, buses ferry hundreds of thousands of visitors along that road each year, with the surrounding area remaining off limits.

The $1.15 million de-mining project, which was funded by Israel and private donors, aims to open up access to the area for pilgrims, clergy and tourists in about a year.

The de-mining project began earlier in March with work on the Ethiopian church’s property, where barbed-wire fencing with yellow “DANGER MINES!” signs encircles crumbling, sand-hued buildings, one with a rusted cross. Bulldozers sifted through the mine-laden earth.

Within the church compound, an armored vehicle dug into the earth, hoisting up a chunk of soil and then straining it through a sifter, searching for anti-personnel mines the size of a block of Camembert cheese.

Mounds of soil were heaped in piles around the area, each marked cleared from mines or still hazardous. In the distance, a string of anti-tank mines, each slightly larger than a 30-centimeter (12-inch) pizza, protruded from the ground.

To detect the mines, experts have had to look at historical records, interview former Israeli soldiers and survey old maps.

Anti-tank mines, with heavier charges, are embedded to the west of an access road while anti-personnel mines and booby traps are located within the church plots.

But experts said the reconnaissance work isn’t exact and the geography — the ever-shifting top soil of the Jordan River Valley — has displaced some of them. Painstaking hard work fills in the gaps, with drones, dogs, metal detectors and bulldozers used to sniff out and snuff out the leftover mines.

“It’s a challenge that requires working slowly, in a safe way and not to take any chances,” said Marcel Aviv, the director of the Israeli de-mining authority, INMAA.

Eight churches are scattered across the nearly 250-acre expanse of land that borders the baptism site. The churches share custodianship of many sites in the Holy Land and often butt heads over how to manage them. It took about four years to get all denominations to agree to the terms of the project, a process that saw Cowan, The HALO Trust director, meet church leaders, including Pope Francis.

HALO also waded into the Mideast conflict, seeking approval to work on the site from Israel, which controls the area, and getting a green light from the Palestinians who claim the West Bank as part of their future state.

Majid Fityani, the Palestinian governor of the nearby city of Jericho, welcomed the de-mining.

“We have been demanding the removal of these mines for a long time,” he said. “We are interested in removing these mines that were planted by Israel because this is our land.”

Mine agencies from both sides are brought in to supervise HALO’s work, the group said. Jordan provides access to the baptism site from the other side of the river and Cowan also met with the country’s king to discuss the matter.

“We pray and hope that the clearance of land mines around the baptism site will contribute to peace and reconciliation in our region, which is very much needed at this time,” Theophilos III, the Greek Orthodox patriarch of the Holy Land, said in a statement. “We are glad that after many years, pilgrims from around the world will be able to fully experience and venerate this holy site.”

Thousands of Egyptian Christians headed to Jerusalem for Easter