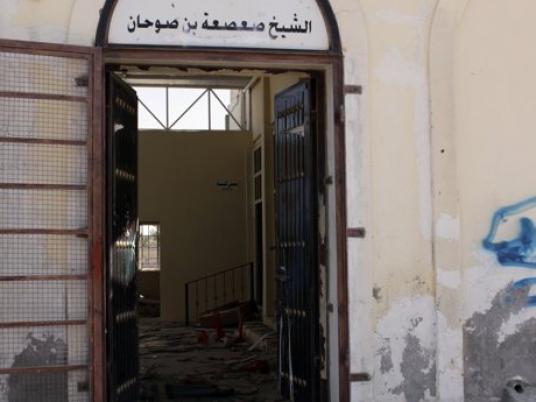 MANAMA, Bahrain — At some point before dawn, the vandals struck with brutal efficiency, smashing the windows at one of Bahrain

's oldest Shia mosques. Then the attackers walked over the broken shards to ransack offices and prayer areas — making sure to pull down some framed parchments with Quranic verses.

The attack last week, described by scholars and custodians of the centuries-old site, was quickly overshadowed by another wave of clashes in Bahrain's 13-month-old uprising by the kingdom's Shia majority.

But even as the beleaguered Sunni monarchy claims progress toward reconciliation, the battered facade of the Sasa'a bin Sawhan mosque underscored the deep anger and suspicions that still feed the Arab Spring's longest-running street battles — which show no signs of ending.

"I am horrified," said Bahrain-based historian Jassim al-Abass following the 13 March attack on the site, which has connections to the earliest periods of Islam in the seventh century. "Instead of protecting mosques, officials are letting this happen."

Bahrain's Shia mosques have been one of the most sensitive targets in the government's crackdown on dissent and later attempts to make amends. Shia clerics claim at least 38 mosques and affiliated sites, such as charity offices, were destroyed after the revolt began in February 2011. Bahrain's Shias — who account for about 70 percent of the population but allege they face widespread discrimination — rose up to demand a greater political voice. Some activists place the number of destroyed mosques at 55 or higher.

On Tuesday, a report given to Bahrain's king, Hamad bin Isa al-Khalifa, reaffirmed plans to rebuild 12 Shia mosques demolished last year by authorities. It's unclear, however, what progress has been made on the sites.

In a speech on the progress of political reforms in response to the ongoing unrest, the king said the rebuilding of the mosques should proceed.

"Given that the state is entrusted to build the places of worship and care for them, we instruct that work continues in accordance with laws and regulations," the king said.

Bahraini officials did not immediately respond to questions about the mosque projects or the claims about the vandalism against the Sasa'a bin Sawhan mosque. In November, an independent investigation into Bahrain's unrest cited the destruction of Shia mosques as giving "the impression of collective punishment."

Bahrain's government has said the razed Shia mosques lacked permits and were illegally built. Shia activists say the bulldozers were brought as retribution for the rebellion.

Mosques had no special role in the Shia uprising, but Friday prayer sermons often denounced the government crackdowns.

The opposing narratives highlight the perception gaps that have so far blocked dialogue between the Sunni dynasty and main Shia factions.

Authorities insist they have made important concessions and reforms, including giving more powers to the elected parliament, addressing abuses within security forces and restoring state jobs for Shias purged from their posts. But many Shia groups have set their demands much higher: Calling on the rulers to give up their monopoly on power and open top decision-making positions to Shias.

Bahrain's stalemate — which has claimed at least 45 lives — also has left Washington caught in the middle.

The US has pressed Bahrain's leaders to ease their use of force against protesters, but is wary about applying too much pressure and jeopardizing one of its most important military alliances in the Gulf at a time of escalating tensions with Iran. Bahrain hosts the US Navy's 5th Fleet, which would have a front-line role in confronting any Iranian attempts to disrupt oil shipping in the Gulf.

Last year, US President Barack Obama publicly reprimanded Bahrain's rulers for their heavy-handed tactics and said Shias "must never have their mosques destroyed."

Shia leaders did not accuse state forces of involvement in the latest damage inflicted on the Sasa'a bin Sawhan mosque, but suggested that routine security was lacking at a site with such significance.

The mosque — on a site with connections to worship during Islam's first century — is now in a predominantly Sunni area in Askar, about 20 kilometers south of the capital Manama, that includes many Sunni Arabs and South Asians given Bahraini citizenship under government plans to boost Sunni numbers.

The mosque was closed shortly after the first mass protests last year and was struck by vandals, who left anti-Shia graffiti and broken windows. The latest attack cause far more extensive damage, said Ahmed al-Ghurafi, a member of the Islamic Scholars Council, which has a caretaker role for many important Muslim sites in Bahrain.

"This matter has crossed all limits," he said. "There is no respect for religious or civil rights."

"This is our strategy to ensure that all the mosques must be rebuilt," said Ghurafi, "and to say that those who destroyed them must be held accountable."