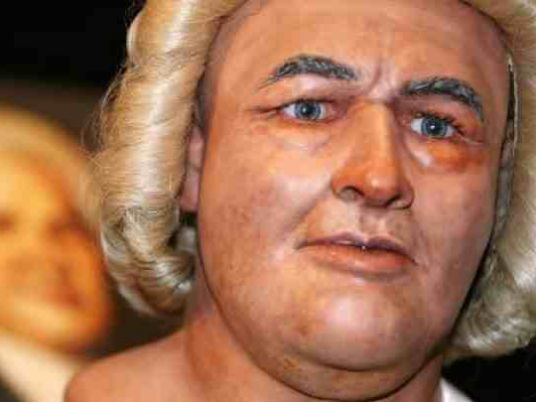 The best-known portrait of German composer Johann Sebastian Bach was welcomed back in his home city in an emotional ceremony Friday after an odyssey sparked when the Nazis came to power.
Back in the city of Leipzig thanks to the largesses of a late US millionaire and classical music lover, the 1748 work was unveiled in a packed church, going on public view for the first time in centuries.
Whispers gave way to loud applause in the packed St Nicholas Church as a white veil was lifted off the portrait that shows the bewigged composer aged around 60 in a formal pose holding the score to one of his canons.
"Bach is coming home," said a tearful Barbara Scheide, daughter of the late US philanthropist William Scheide who died in November at the age of 100, having bequeathed the painting to the Leipzig Bach Archive.
The ceremony to welcome back the painting featured the local St Thomas boys choir of which Bach was once cantor and kicked off the annual Bachfest, featuring more than 100 concerts until June 21, in the 1,000-year-old city.
"This is a stroke of luck for Leipzig, now everyone will be able to see the painting," said 73-year-old fan Konrad Kraut, sitting outside the church on a lawn chair and watching a telecast of the ceremony on a big screen.
Bach, best known for composing The Brandenburg Concertos, was described by the 18th century composer Ludwig Van Beethoven as "the immortal god of harmony".
His portrait by painter Elias Gottlob Haussmann, now valued at US$2.5 million (2.2 million euros), is widely considered the most authentic depiction of the Baroque period composer and appears in many biographies.
"The portrait, which probably everyone has already seen once in their life, is an icon of music history and, to judge by the sources, is the only true portrayal of the composer," said the Bach museum.
"All the portraits of Bach known today stem from this one painting."
'Under Bach's gaze'
The painting's history is both colorful and beguiling.
Its exact whereabouts over many years are uncertain, but it was owned from the early 19th century by the Jewish Jenke family from Breslau, now Wroclaw in western Poland.
Walter Jenke, a descendant of the buyer, fled Germany in the 1930s when the Nazis came to power.
The portrait was put for safekeeping during World War II at the country home of friends, the Gardiner family, in the southwestern English county of Dorset, away from German bombs.
In another twist to the portrait's tale, English conductor John Eliot Gardiner — now the Bach Archive's president and one of the world's great Bach conductors — grew up with the painting.
"I literally grew up under Bach's gaze," he said in April, when he brought his Monteverdi Choir to serenade the portrait at Scheide's home in Princeton, New Jersey, in the presence of the philanthropist's widow Judith.
Gardiner — author of a 2013 book on Bach, "Music in the Castle of Heaven" — said it was "gratifying" to see the journey of the portrait coming full circle.
It was last owned by Scheide — who struck it rich at a young age from oil and devoted his life to musicology and rare books — and who bought the painting at an auction in 1952.
Decades later, in 1985, he had expressed a wish to see it return home one day, the museum said.
In February, Princeton University announced that Scheide, an alumnus, had donated his collection of rare books and manuscripts valued at some $300 million.
The Scheide collection also includes the first six printed editions of the Bible and an original printing of the US Declaration of Independence.
Now the Leipzig archive — located in a 16th century building opposite St Thomas Church, where Bach served as cantor for 27 years — is putting the portrait on permanent public display for the first time since the 18th century.