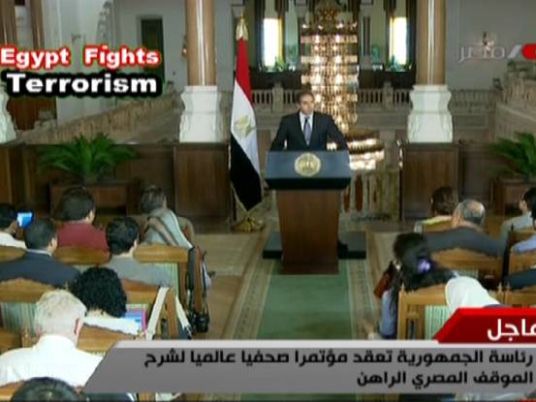 Mostafa Hegazy, political adviser to interim President Adly Mansour, said the massive protests staged on 30 June were an expression of the Egyptian people's desire to rid the country of "religious fascism."

The presidential staffer issued a strongly-worded statement addressing developments over the past few days in Egypt which have seen hundreds killed and the polarized divide between government and Muslim Brotherhood ever larger.

The state is determined to defeat terrorism with the help of security forces and the law, all while upholding human rights, he said.

At an international press conference held on Saturday, Hegazy added that the Egyptian state supports freedom of expression and the right to stage sit-ins provided they are peaceful, adding that the dispersed sit-ins in Rabaa al-Adaweya and al-Nahda were in fact not peaceful.

He said the Egyptian administration has welcomed local, regional and international efforts to facilitate negotiations with radical powers staging sit-ins in Rabaa and Nahda in order for them to become part of the army-led roadmap for the future.

Hegazy added that the Egyptian leadership called on all parties to abandon violence and to join forces with other parties for a better future.

“Egyptians are more united than before," he said, adding that the people muist stand together against all parties that use violence. Talk about division in the Egyptian street is not true, he stressed.

Hegazy said that the current situation cannot be described as resulting from political differences. Egypt is facing a war waged by radical powers developing day after day into terror groups. Taking a look at the situation in Cairo and Sinai and the methods used to spread fear and intimidate citizens is good evidence, he added.

The state wanted to fulfil the demands people made by the people on 30 June, Hegazy claimed.

“The people took to the streets to give authorisation to the administration to establish a civil democratic state.” The state is continuing along the democratic path and will write a constitution, he added.

The state welcomes the participation of all parties and factions in the building of the political life in Egypt, so long as they abandon terrorism, he said, adding that the people rejected religious fascism on 30 June.

“Even though we are sorry for every drop of blood spilled, we are monitoring responses by the U.S. and the Taliban. Egypt knows who supports terrorism and who rejects it and supports the Egyptian government against it," Hegazy hinted, without elaborating.

Hegazy said that the state will protect Egyptians against "religious fascism" and will seek to put together an inclusive constitution that everyone gets to write together.

“Egyptians today know who has let them down and who stands by them as well as who provides financial and moral cover to those who exercise violence,” he said.

“The Egyptian state is not a weak state or a satellite state. It is a sovereign state that monitors events, analyses them and takes action at the appropriate time.”

“The current stage is not only an interim one, but also one that establishes for the future. We will build our new Egyptian state on the basis of justice,” he said.

Hegazy said the Terrorism Act will be implemented firmly against those who violate the law.

The presidential staffer also said that a "well-known news agency" had attributed to an unidentified source news that the Muslim Brotherhood proposed an initiative to resolve the political crisis but the government stood in the way of it.

Hegazy questioned the performance of international media outlets which describe the protesters as peaceful. “I do not see any peaceful protesters. On Friday, we saw machine guns and snipers. Where are the stories about the use of women and children as human shields?”

Asked about Egypt’s stance towards Qatar which condemned the dispersal of the sit-ins, Hegazy said that every step is decided at the appropriate point in time.