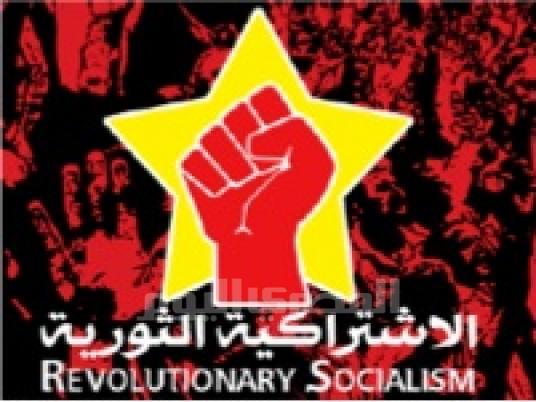 These are the words of Sameh Naguib, a member of the Revolutionary Socialists movement, recorded in a clip that has been circulating over the past few weeks on online social networks. His words, and those of his comrades, have sparked widespread controversy over the nature of the ideas espoused by this movement and the political ideology of its members.

For example, three members of the Muslim Brotherhood filed a complaint in late December with the public prosecution against some of the movement’s members, including Naguib, claiming that they are inciting unrest with the aim of overthrowing the state ― and even conspiring to burn down state facilities.

But members of the group purport that their call is for a radical transformation of the Egyptian state and how the military wing has come to be its strongest and most privileged institution.

“The democratization of Egypt depends on the occurrence of a real revolution in which sovereignty and priority is given to the demands of the masses,” said Ahmad Ezzat, a member of the Revolutionary Socialists. “However the SCAF’s idea for democratic transformation is a deal which it made with a number of elitist liberal political forces and others, such as the Muslim Brotherhood, who represent the majority of voters, to draw up a road map for the country which will ensure it has a semi-permanent position allowing it to intervene in the country’s governance.”

The group seeks to push 25 January toward a socialist revolution. Yet, following the recent parliamentary elections, the character of the state appears to be drifting toward Islamism rather than socialism, with Islamist coalitions reaping about 65 percent of the seats in the People's Assembly.

For Hisham Fouad, a labor journalist and founding member of the socialist group, a presidential or parliamentary democracy is not the ideal way to establish a socialist society or workers’ state. “We don’t believe that parliamentary politics are the best way to represent the will or interests of the masses. This system serves to protect the interests of businessmen and the wealthy ― those who can afford the expenses of electoral campaigning.”

Echoing Fouad, Ezzat believes that the Islamists’ established power in parliament is leading Egypt away from the revolution.

“Unfortunately, most political forces work toward their own personal gains and have completely abandoned the revolutionary dream of change to the end, in particular the Islamist forces that after having succeeded in reaping the majority of votes in parliament completely abandoned the idea of completing the revolution,” he said of the Islamist majority in the People's Assembly, which was seated a few days ago.

Predating the 25 January revolution by two decades, the Revolutionary Socialists group was established in 1990 by a group of youths from Egyptian universities around the time of the demise of the Soviet Union and breakout of revolutions against socialist regimes in Eastern Europe.

In light of its Marxist–Leninist or Trotskyist orientation, the socialist group welcomed the collapse of the USSR ― saying it was a “degenerated workers’ state,” and failed experiment in “state capitalism” or “market socialism.”

At its onset, the group was interested in filling a void in the Egyptian left, especially in the wake of what it viewed as the failure of economic liberalization policies under presidents Anwar Sadat and Hosni Mubarak.

Despite their working-class orientation, most of the group's members ― some claim the membership is in the thousands ― are students and professionals. Very few blue-collar workers or farmers populate its ranks.

This month, the organization launched an open-ended campaign dubbed “The Square and the Factories are One Hand” in an attempt to unify workers and street protesters toward realizing the revolutionary demands of “Bread, freedom and social justice.”

This campaign demands the establishment of a monthly minimum wage (of LE1,500, or about US$250) and a maximum wage (not more than ten times the minimum), issuance of a new trade union law, continued right to strike or protest, establishment of independent unions, legal collective bargaining, and fixed contracts for full-time laborers, among other demands.

With the eruption of the 25 January revolution, the group's members have revisited their vision for a socialist state. Some members believe that forming parties can be an important act in the transitional period to ultimately bring about a socialist state.

Egypt’s Trotskyists ― who include the Revolutionary Socialists and Socialist Renewal Current ― have been instrumental in establishing the Workers Democratic Party and the Socialist Popular Alliance Party, respectively.

"We supported the establishment of the Workers Democratic Party so that Egypt will have a party that reflects the demands of laborers in general,” said Ezzat, who acknowledges the limitations placed on class-based parties in the Political Parties Law.

While the Socialist Popular Alliance Party has been registered, the Workers Democratic Party is not yet official.

But Fouad believes a socialist state will be realized through other means.

“The best way to represent the toiling classes is through elected workers’ councils and farmers’ councils, which directly represent the will of their constituents,” he said. “These councils will serve to facilitate the self-organization and administration by these laborers in a socialist state.”

Many criticize the Revolutionary Socialists ― along with other Trotskyist movements ― for their centralized and vanguardist approach to working-class and revolutionary politics, a criticism they find hard to shake off.

According to Fouad, “Although a number of Leninist and Trotskyist parties have indeed followed this policy in the past, we ourselves are not vanguardists.”

“This revolution, as with all others, was led by progressive elements in society. We are merely an organization for the most progressive of these elements,” he added.

As he further explained, “We believe in democratic centralism. In this sense we fully support freedom of expression, opinion and dissent. Our centrality is based only on the unity of our democratic will.”

For many activists and observers, the Revolutionary Socialists are important as a radical political voice, yet they are far from being able to bring down the state, as Naguib suggested.

Ashraf al-Sherif, a professor of political science at the American University in Cairo, said the movement will not be able to radically transform Egypt because its political project is based on seizing control of the state. This would require its presence in all state production sectors, which at the moment the group is too weak to accomplish, he said.

“In most cases of democratization, moderate movements will prevail in the end rather than radical ones such as the Revolutionary Socialists, as [socialist] policies are directed more toward protest than reform,” he said. “Clinging to radical ideas does not usually serve the owners of these ideas.”

And while many, even within the Egyptian left, criticize the Revolutionary Socialists for sticking to what many perceive to be an outdated Trotskyist ideology, the group's members say their policies are based on their own vision of the events taking place in Egypt. Seeking a classless society ― indeed a classless world ― they argue that the majority of conflicts in communities are the result of class conflicts, even when they take on other forms such as political conflict or sectarianism.