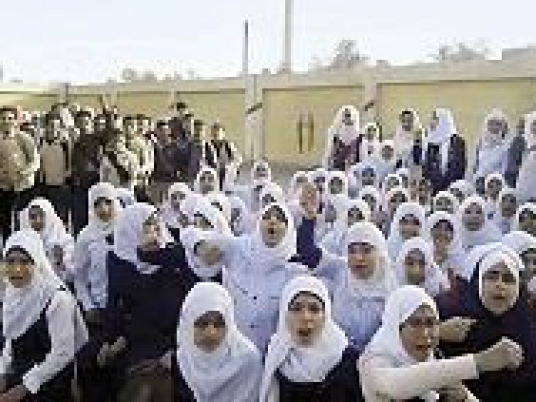 Around 155 students in a Beni Suef school refused to go to classes and protested at the school’s yard condemning the transfer of their teacher after a brawl with one of its administrators.
Students at the Basatin Preparatory School refused to sing the national anthem during the daily pre-class lineup, and instead chanted slogans demanding the reinstatement of their teacher.
“Not going to our classrooms, we are on strike,” chanted the students, demanding the return of Yasser Rabea, their math teacher.
Mr Rabea had been relocated to another educational district after he engaged in a brawl with the school’s secretary over delayed teachers’ salaries. He said the secretary accused him of insulting her, whereby the administration approved the transfer without prior investigation.
Rabea added that the deputy head of Beni Suef’s education department was the secretary’s brother-in-law.
The situation prompted the province’s education department head, Moataz Hassan, to move to the scene and urge the students to move to their classrooms, promising to pass by each class to listen to their complaints.
Edited translation from Al-Masry Al-Youm