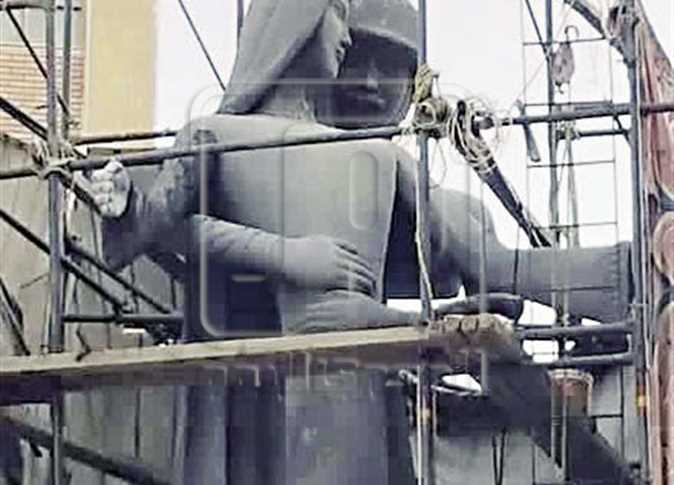 A provincial governor in Egypt has ordered changes to a sculpture honoring fallen soldiers after many on social media said it appeared to depict an unwanted advance on a woman symbolizing the country.
The concrete sculpture, titled "Mother of the Martyr," depicts a slender peasant woman, a traditional artistic representation of Egypt, with her arms outstretched. A helmeted soldier is standing behind her, looking over her shoulder with his arms wrapped around her.
Residents of Sohag, where the sculpture stands at a public square in a provincial town but has not been formally unveiled, complained that it was inappropriate. Sohag and other southern provinces are more conservative than the rest of the Muslim-majority country.
The controversy over the sculpture, which made it to the national press, underlines the difficulties faced by artists and intellectuals in a country where Islamic religious conservatism has gained much ground over the past 40-50 years and where powerful state religious institutions frequently expound a hard-line message, despite their claims to moderation.
Some critics of the Sohag statue, which stands at 8.5 meters high, said in their social media comments that the sculpture portrayed sexual harassment while others interpreted it as the country's military seducing Egypt as represented by the peasant woman. That the sculpture stood close to a girls' school fueled opposition.
Sohag's governor, Ayman Abdel-Monaim, has ordered an investigation into the commissioning of the sculpture by the local council of the town of Al-Belina. He said his provincial government should have been consulted before the LE250,000 (US$28,400) sculpture was commissioned
"Sometimes, an artist's vision clashes with the culture of society," he said. "If our objective is to treat citizens with respect, then we must not do anything to offend their feelings. We all respect our army and country."
The sculptor, Wagih Yani, 60, has begun modifying the sculpture, removing the soldier and placing an olive branch in the hands of the woman. White doves symbolizing peace will form a crescent over the woman's head, he said.
Speaking to The Associated Press, Yani defended his work, rejecting any suggestions of impropriety and saying the soldier represented the "spirit of the martyr" protecting Egypt.
"I remain convinced of the sculpture's original idea and the modifications will not steer far from that," he said. "But I personally feel that it's important to me that everyone is happy with the sculpture."