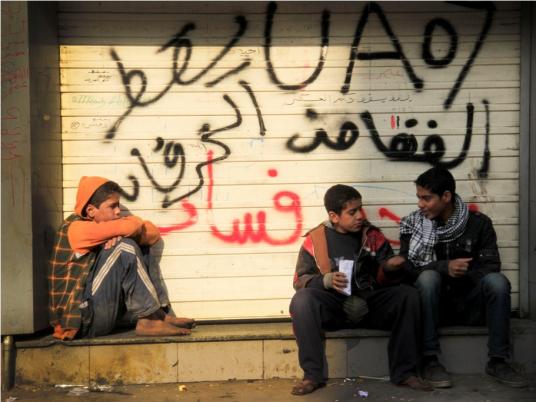 The Egyptian Coalition for Children's Rights reported 13 children were among 56 people arrested in Tahrir Square and the surrounding area Tuesday and alleged violence was used against the minors.

Some of the detainees are less than 15 years old and were taken into custody randomly, the organization alleged in a statement Wednesday evening, adding that the prosecution ordered they be turned over to their families.

Those arrested were accused of thuggery, harassment, attacking security forces with Molotov cocktails, preventing public employees from carrying out their duties and blocking traffic in the square, the statement said, describing the charges as unreasonable.

The accused were taken to Darb al-Ahmar Police Station before being transferred to prosecution offices in the Fifth Settlement and undergoing seven hours of interrogation.

The ongoing arrest of children has become one of the most serious acts by the Interior Ministry as it undermines the safety of youths and confirms the state's failure to provide care for children, the statement said.

The detainees were not arrested during clashes, but while the police were attempting to open the square to traffic, the coalition said, corroborating earlier media accounts of Tuesday's events.

The statement said defendants were charged with misdemeanors, which means they should not have been interrogated by the Supreme State Security Prosecution.