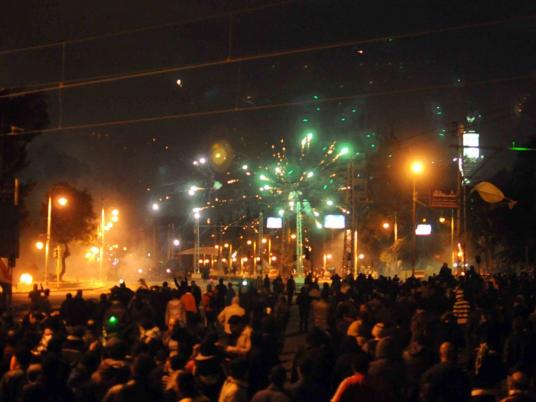 Thursday’s papers follow the saga of a controversial draft law restricting protests. Although the government says the legislation is slated to preserve peaceful demonstrations and protect their participants, many disagree that limiting this fundamental freedom is a step in the right direction.

State-owned Al-Ahram newspaper reports that the draft bill, which was approved by the Cabinet on Wednesday, bans protesters from carrying arms, vandalizing buildings and wearing masks or religious garb such as niqabs.

Al-Akhbar, another daily state newspaper, also makes the proposed protest law regulating demonstrations its top news, writing that the bill allows police officers to protest and includes provisions to punish sexual harassers, criminals and vandals harshly. The draft law is set to go before the Shura Council for its stamp of approval before it can become law.

Al-Ahram also reports on tax increases for 100 imported commodities as part of the Ministry of Industry and Foreign Trade’s efforts to stop the drain on foreign reserves. The ministry said each of the commodities listed has a locally produced alternative. This decision comes amid warnings from international economic experts that Egypt is facing a crisis. Earlier this week, global credit rating agency Moody’s downgraded the nation’s credit rating, adding that the country’s political deadlock will likely worsen conditions in the coming year.

Other tops stories in Al-Akhbar include “Tahrir Square area turned into a shelter for stray cats and dogs” and the “The metro is under siege.”

Al-Ahram echoes its state competitor with a story about the ongoing sit-in at Tahrir Square, which forced the closure of the Mugamma earlier this week and stopped traffic from entering the square.

The two newspapers also dedicate a section of their front pages to US President Barack Obama’s remarks in his annual State of the Union address. According to the papers, Obama pledged his support for Egypt and the democratization of the Middle East. He also plans to visit the region in March, stressing that Washington can’t dictate Egypt’s transition. However, the US will offer support for citizens who are calling for the government to respect basic human rights and individual freedoms.

None of these topics get much play from privately owned newspapers. Al-Shorouk, for example, mentions Obama’s speech on its third page.

Instead, its front page details domestic political drama in a story dedicated to ongoing negotiations over a proposed cabinet shuffle. The story suggests political factions are ready to name Kamal al-Ganzouri as prime minister for a third time, replacing Hesham Qandil.

The Nour Party, which is heading the initiative, is acting as the go-between for the National Salvation Front and the Muslim Brotherhood’s Freedom and Justice Party in an attempt to bring both to the table at a national dialogue that will likely be scheduled for next week.

Al-Akhbar also claims the president’s office is trying to get the NSF to participate since most political factions are also backing a Cabinet shakeup.

Meanwhile, privately-owned Al-Tahrir newspaper made the report on the cause of death of activist Mohamed al-Gendy earlier this month its top story.

Private competitor Youm7 follows suit. Both compare Gendy’s tragic death to that of Khaled Saeed, who died in 2010 after being tortured by police in Alexandria. The newspapers report that the opposition Popular Current group rejected the government’s stance that Gendy died due to injuries suffered in a car accident and called the forensic report “fake.” The organization asserts Gendy was tortured by police only to die later from his injuries in hospital.

Another issue splashing across the papers is the release of Mahmoud Shaban, the Al-Azhar professor who issued a religious declaration encouraging the killing of National Salvation Front members, on LE5000 bail.

According to Al-Shorouk, the Public Prosecution has charged Shaban with inciting murder of political figures.

The newspaper also features a story about the Criminal Court ordering the release Zakariya Azmy, the former presidential staff chief who was detained pending investigations in a corruption case. The story says the Court of Cassation decided to retry Azmy on illicit gains charges. Azmy had been sentenced to seven years in prison before winning an appeal.